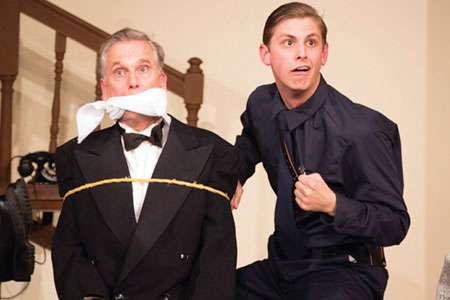 What happens when two elderly philanthropic women decide to take it upon themselves to murder lonely old men by poisoning them with a glass of homemade elderberry wine laced with arsenic, strychnine and “just a pinch of cyanide?” Well, if the two women are Abby and Martha Brewster, a series of comical exploits in their Brooklyn NY home happens. See, the Brewster women are completely at-ease with their decision and personal friends with the police department. In fact, not a single person believes the two lovely ladies are that misguided. Such is the basic storyline of the Santa Clara Players’ latest production, the Joseph Kesselring penned dark comedy, Arsenic and Old Lace.

It all starts with the Brewsters placing ads to rent out empty rooms within their home. When the men answer, their fate is sealed. But, they don’t go without a proper burial and funeral service in the Brewsters’ basement.

To complicate matters, the Brewsters’ brother, Teddy, believes he is Teddy Roosevelt and that each victim has passed from yellow fever. Teddy Brewster unknowingly aids the women by digging graves in what he believes to be the Panama Canal. Further, their nephew, Mortimer, struggles with the promise he has recently made to marry the love of his life, the beautiful Elaine Harper, who happens to be the daughter of the town minister.

Just when audiences think that the story may wrap up and the confusion will be fixed, the Brewster home gets the one guest they never expected…or wanted – their brother, Jonathan, a murderous sociopath shows up with his alcoholic, plastic surgeon accomplice, Dr. Einstein. They not only show up unannounced, but come with a victim of their own – one the Brewster women refuse to claim.

The house is in turmoil. The Brewster women want Jonathan Brewster out, while he has what he thinks is an ace up his sleeve – the gravesites in the basement trenches. Mortimer Brewster just wants to put the whole mess behind him, and Teddy Brewster…Well, he’s happy just being the president. 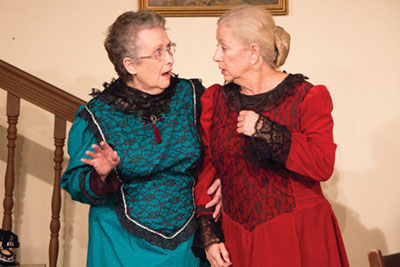 Mortimer Brewster’s plan to fix everything is to pin the murders on his eccentric uncle, rid himself of his seedy other uncle, and convince his aunts that life is better when death isn’t involved. The series plays out through a series of comical events involving all the characters, but can this play truly have a happy ending?