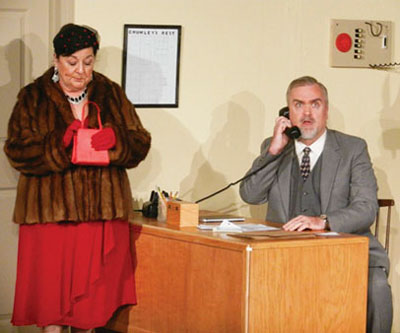 Does having an imaginary friend make someone certifiably insane? Is it enough to lock them up in a sanitarium so they can live out their days getting tortured, poked and prodded in order to straighten them out? Or, is the “illness” worth ignoring because it affects the person in a way that makes them kinder and friendlier to those around him? These are the questions asked and answered in the Santa Clara Players production of “Harvey.”

Harvey goes with Dowd everywhere. Dowd buys theater tickets for two, magazine subscriptions in pairs, and introduces his friend to everyone he meets. However, Dowd’s antics are wearing on Simmons and her daughter, Myrtle Mae (Jenni Gebhardt). The pair is socially ambitious and Dowd’s imagination and eccentric behavior has hindered their ability to climb the social ladder. To help improve their status, Simmons resolves to have her brother committed to the local sanitarium, Chumley’s Rest.

Upon arrival, a psychiatrist, Lyman Sanderson (Alan Glover), mistakes Simmons for the crazy one and commits her when she admits that she has seen Harvey too. Through a series of events, the staff realizes they’ve made a terrible error, one that could ruin them. They release Simmons and search for Dowd, who happens to be searching for Harvey.

When a night at the bar with Dr. William Chumley (Steve Lewis) proves that Dowd might not be as crazy as previously thought, the wrinkles begin to iron out. But, as with most situations, the potential for personal gain causes the doctors to recommend that Dowd receive an injection that will turn him into a “normal” person.

Dowd refuses but Simmons insists and Dowd’s desire to make his sister happy puts him face-to-face with the doctor’s needle. Seconds before Dowd receives his dose, the taxi driver, E.J. Lofgren (George Doeltz), arrives and demands payment for his services. Simmons searches her purse but can’t find her coins. She must retrieve Dowd to pay her debts. Upon payment, Dowd returns to the room and Simmons learns the awful truth of what the serum does. “On the way out here, they sit back and enjoy the ride,” says Lofgren. “They talk to me. Sometimes we stop and watch the sunsets and look at the birds flyin’. Sometimes we stop and watch the birds when there ain’t no birds – and look at the sunsets when it’s rainin’. We have a swell time. And I always get a big tip. But afterwards? Oh no! … After this, he’ll be a perfectly normal human bein’ – and you know what stinkers they are.”