Santa Clara’s City Council will soon be asked to approve the Patrick Henry Drive Specific Plan. The City’s Planning Commission voted on Jan. 26 to approve four staff recommendations in the plan, pushing the entire document forward to the City Council for final approval.

Commissioners unanimously approved Recommendation 1, which dealt with the Environmental Impact Report (EIR), including CEQA findings and a statement of overriding considerations.

Regarding the EIR, the City found there would be some emission issues due to construction, but they would have short-term impact.

City staff received five letters about the EIR during the comment period but none of those comments identified “new significant impact” or provided “substantial evidence” that the CEQA analysis is inadequate.

The Planning Commission approved the plan with added language from a letter submitted by Silicon Valley MEPS. The language would “encourage” the use of local skilled workers and apprentices.

Several Santa Clara residents spoke in favor of the addition, including Corey, a local plumber.

“We need to invest in the local construction workforce, just like what happened when Levi’s Stadium was built,” said Corey. “I support the development that brings value to our community. Please do the right thing for apprentices and local residents who want to enter the trade so they can afford to raise their families here in Santa Clara.”

Assistant City Attorney Xander Abbe cautioned against the plan. He said under federal law, the City cannot require the use of skilled and trained workforce or unionized labor.

“The lawyer in me gets very nervous with the word ‘encourage’ because, again, we do not have any legal authority to require this. So, how exactly do we encourage if we cannot require it,” asked Abbe.

“At this point, looking at that language, I frankly don’t see anything wrong with it and I frankly think it does drive stuff in the direction that we’d all like to see happen,” said Planning Commission Chair Nancy Biagini. “I also recognize that sometimes the best way to move something forward to a higher level is when you take incremental steps to be there.” 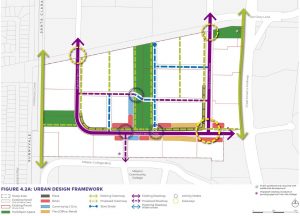 The Commission also added language to “Figure 4.6.2 ALT: Circulation” which dealt with a paseo connection to Mission College. In parts of the Patrick Henry Drive Specific Plan, there are figures that show a road connecting the area to Mission College. However, the Mission College Board of Trustees voted against the connector, choosing a paseo instead.

City staff asked to keep designs of the roadway in the plan to make it easier to approve a roadway if the Mission College Board of Trustees changed its mind.

The Planning Commission asked for clarifying language with the images to reiterate the roadway is only possible at the request of Mission College.

The Planning Commission unanimously approved a General Plan amendment that would create land use designations specific to the Patrick Henry Drive area.

The resolution also recommends updating the Climate Action Plan to recognize the new land use designations and amending the General Plan Land Use diagrams to reflect the changes.

Finally, the Planning Commission unanimously recommended adopting an ordinance to amend the Zoning Code to include development standards for the Patrick Henry Drive area.

This included a recommendation that the area be composed of 15 percent affordable units split equally between three affordability levels: 50 percent, 80 percent and 120 percent AMI.

Commissioner Priya Cherukuru pulled the meeting minutes from the Consent Calendar to discuss the formatting of the minutes. Cherukuru expressed concern that the minutes were starting to look abbreviated.

Most of the commissioners agreed with the assessment.

City staff says it believes the brevity of the minutes stems from a request from a Planning Commission meeting that took place prior to the installment of several of the current commissioners.

As part of the discussion, Commissioner Lance Saleme suggested that City staff time stamp video on YouTube to enable viewers to jump to specific topics of discussion.

Commission Chair Nancy Biagini suggested that in the future, commissioners make specific note of what they would like to have City staff include in the meeting minutes.

The next Planning Commission meeting is scheduled for Wednesday, Feb. 16. City staff does not believe there are any items for the upcoming agenda.

Commissioners might still convene to broach the idea of future planning goals for the City of Santa Clara, though no goal setting would take place.