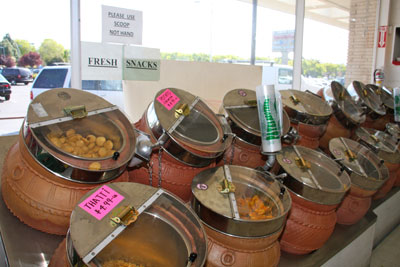 One wet, chilly, California Saturday, I typed www.girlwithspoon.com into the address bar of my Internet browser and hit “Enter,” bringing up my favorite food blog on my computer. Carolyn Lenske, the Girl with Spoon, is a California girl I know living in New York City and experimenting with its ethnically diverse cuisine.

The recipes on her blog are presented with appetizing photos and a personal story. Those I’ve tried are delicious, and the ingredients can be found as readily here in little Santa Clara as in the Big Apple—if you know where to go.

Girl-with-Spoon’s photo of mushroom and red lentil stew enticed me to drive in the rain to the supermarket, but it didn’t have lentils. The cashier recalled an Indian market a few miles away, so I drove off in search of a nameless Indian market somewhere or other on El Camino Real. Clearly, I did not know where to go.

However, a short detour from my regular shopping route eventually led me to Patel Brothers, a vegetarian market on El Camino Real that stocks an array of food from the 29 states of India, items not found on supermarket shelves. Indian music plays in the background as you explore.

“This Indian market is clean, well organized, and well stocked. You find things from back home that you don’t find in other stores. You see vegetables like bitter gourd and pointed gourd,” says Santa Claran Kosha Mehta, originally from Bombay.

“The fresh produce and rice and lentils are cheaper than at the big grocery stores,” she says. A snowy cauliflower, for example, was on special for 69 cents. Yellow onions were 29 cents/pound.

Lentils, also called “dal,” are stocked in a rainbow of colors—yellow, green, brown, black, and orange-red for $2.99/two pounds. Comparison shopping another day, I found red lentils for $2.69/one pound at a popular, upscale food store. Packed shelves hold not one but 25 kinds of chutney. Indian spices are packaged in small bags. A woman wearing a turquoise sari holds a plastic bag as her husband scoops a spicy Indian snack into it from a barrel. Indian breads are near the checkout area.

Mehta points out an entire wall with frozen vegetables, ready-to-eat savory foods, Indian sweets, and ice cream made without eggs. At the far end of the wall are separate sections of food from Sri Lanka and Bangladesh.

Patel Brothers opened in Santa Clara four years ago in July. It is the only local Indian market with modern cash registers according to managers Bhanu Patel and Anil Patel (not related), and energy-efficient lights have just been installed in the 5,000-square-foot store.

The family-owned franchise has 55 stores nationally and carries its own brands of products, including “SWAD” foods.

“We are the biggest importer of Indian groceries and spices in the U.S.,” says Anil. “Ninety-nine percent of Bay Area restaurants buy from us.”

The Santa Clara franchise is the only one in California, but there are plans to open three more.

My mushroom and red lentil stew, by the way, was delicious that rainy Saturday in late March.

Get Fabulous Hair at Scotia Salon