“I think this story is about my aunt and uncle, who fled Vietnam. Whatever I’ve done in my life, I don’t think it can compare to what they’ve done.”

They moved a few more times before his aunt and uncle were finally able to scrape together enough money to buy a house in San Jose’s Berryessa neighborhood.

Like any kid, Ngo grew up watching TV shows like Starsky & Hutch, Kojak, and SWAT, but he knew his family would not approve of a life in law enforcement.

“They wanted me to be a dentist,” said Ngo with a laugh. “In Asian culture, especially Vietnamese, they didn’t have a lot of respect for people in law enforcement because it’s mostly people that didn’t have a good education and they’re corrupt in the homeland.”

Ngo graduated from Independence High School in San Jose in 1984. He remembers vividly the decision he made that steered him down the path to law enforcement despite his family’s objections.

“When I graduated from high school I applied to two colleges, San Jose State, undeclared major, and UC Davis as a Bio Chem major,” said Ngo. “I got accepted to UC Davis first. I really didn’t want to go to UC Davis and major in Bio Chem and be a dentist. I really wanted to do something with the law, being a police officer, an attorney, whatever, I wanted it law related. I knew that…So, when that letter came, I just never told them that I was accepted to UC Davis. I waited until I got accepted to San Jose State.”

In fact, Ngo didn’t tell his family about his acceptance to UC Davis until 18 years later, when he was promoted to Deputy Chief of the San Jose Police Department (SJPD).

He says his quick rise through SJPD happened because, at the time, he was one of the few Vietnamese officers on the force. 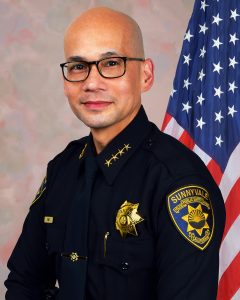 Ngo quickly found his way onto the department’s robbery and gang units and worked his way up the ranks. In 2010, he was named Deputy Chief of the SJPD. He remained there until January 2017, when he became the Chief of Sunnyvale’s DPS.

“Sunnyvale has great community support. The elected officials and the administrators here are very supportive of public safety,” said Ngo when asked about why he chose Sunnyvale. “The community members here are so generous. I see a lot of people volunteer their time here for a lot of worthy projects. They’re not the kind of projects that make the news, but they’re meaningful projects.”

Ngo’s past experiences have helped shape how he handles the department. He has worked to add more transparency to department’s Internal Affairs process and helped create a summer Youth Leadership Academy within the department.

He is also one of a number of county chiefs that signed a letter regarding how the department responds to requests from Immigrations and Customs Enforcement, more commonly known as ICE.