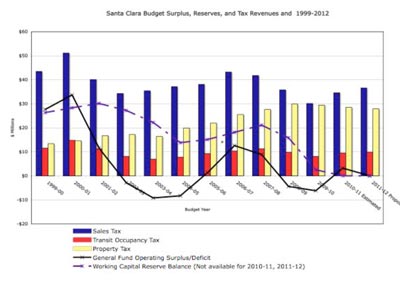 None of this should been surprising. City Manager Jennifer Sparacino warned as early as 2004-05 that the city faced ongoing “structural” – rather than “emergency” – operating budget deficits and dangerously declining reserves.

But it wasn’t until 2010, when the reserves were almost completely depleted, that the City Council found the political will to address the deficit and cut operating expenses, two-thirds of which is compensation for city employees. Even then, the choice was for short term savings – employee furloughs and a moratorium on raises – rather than addressing underlying causes – such as escalating mandatory contributions to California’s public employee pension program, CalPERS.

The current deficit reprieve will be short-lived, according to the City Manager’s transmittal letter for the proposed 2011-12 budget. Beginning in 2013, structural deficits will return as furloughs end in the middle of fiscal year 2013-14.

To balance the budget last year:

Despite these savings, salary, benefit and pension expenditures will grow $2.7 million -1.9 percent – in the coming fiscal year, due primarily to growing benefit and pension costs. One savings that Santa Clara wasn’t able to implement was a “fresh start” refinancing of its CalPERS unfunded liability – similar to refinancing a mortgage. CalPERS denied the city’s refinancing request.

When the reserve fund was established in 1985-86, the objective was to maintain 90 days – or 25 percent – of operating budget in case of financial emergencies or natural disasters. Currently, those reserves are about one tenth of that amount.