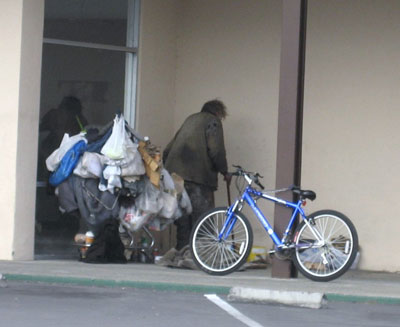 “I want somebody to listen to me. Are you somebody I can talk to?” asks Rudy Munoz outside the Community Ministry office at St. Justin’s Catholic Church on Homestead Road in Santa Clara.

“You can talk to me, but you need to know that I’m a reporter for the Santa Clara Weekly newspaper, and I’m writing stories about homelessness,” I say. It’s a weekday between 10 a.m. and noon, the hours that church volunteers distribute food to needy families and individuals, including the homeless. “Do you still want to talk to me?”

“I want to tell you my story,” says Munoz, holding on to the handlebar of a bicycle with one hand and an open beer can in the other. He looks homeless.

“Is it okay if I write about you? Should I use your real name?”

Munoz says he was born and raised in Santa Clara and graduated from Buchser High School in 1981. He held a steady job as a machinist at the same company for 18 years, was married more than 20 years, and has three adult children. But about 12 years ago he got divorced, and two years later, he lost his job.

Munoz’s parents divorced when he was ten, and he carried animosity toward his dad for many years. Then in 2000, just as he and his father were reconciling, his stepbrother killed his father.

Munoz says that a problem with alcohol has caused all his troubles, including the end of his marriage, and that his father’s tragic death was the tipping point for him. He has been out of work and homeless off and on since then. For now, he’s sleeping nearby in San Jose in his brother’s van.

“I’ll be 50 on August 1st, and I’ve been drinking since I was 20. I kicked myself down by drinking,” Munoz says. “I had two petty thefts for stealing alcohol.”

Munoz loves his daughter and two sons and wishes he were a better role model for them. One of his sons sometimes seeks assistance at St. Justin’s.

“My relationship with my kids means the most to me. I’ve got love for them,” he says.

Getting food is no problem for Munoz.

“I can make $20 a day picking up cans,” he says, enough to not worry about eating. Plus, he can come to St. Justin’s for bag lunches six days a week. He’s a loner who doesn’t hang out with other homeless in the City.

“I just need a place to stay and a place to get some work—just 20 hours a week. A job—if someone would show a tiny bit of faith in me—it would motivate me to not drink,” he says. “It’s important for me to get back to work and get a little sense of pride.”

“It’s not easy just to quit drinking, but I know the blueprint. It’s a matter that I’ve got to apply it to myself. You’ve got to want to quit; you have to feel pain and want to get out of it.”

“It helps just to let it out and talk to somebody,” says Munoz as he mounts his bicycle and pedals off for the day on what he calls ‘can patrol.’