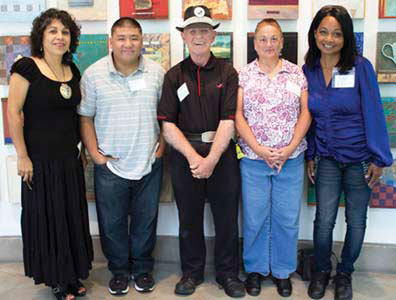 Most people complain that they hate their job, while a very small number of people actually love what they do and look forward to working each day. Imagine being part of the latter group. Now, imagine having a developmental disability that makes finding – and keeping – a job that much harder.

Meet Jay Matthews and Beth Florang, two high-functioning individuals with developmental disabilities that have made it difficult for them to find a job – that is until Evelyne Foy and the Community Integrated Work Program stepped in. Now they work part-time at the Chili’s on Coleman in San Jose and volunteer at the Triton Museum of Art in Santa Clara.

“They roll silverware at Chili’s,” said Foy, a Santa Clara resident. “And they were doing such a good job – it was Wednesday through Friday – that the general manager asked if they would be willing to have more hours.”

When some of CIWP’s clients went to Santa Cruz for an outing a couple of weeks ago Matthews and Florang chose to work instead.

“We stayed back and worked because we wanted to,” said Florang.

“I love Chili’s and I want to be there,” said Matthews. “I want people to look at us as role models. We are good workers.”

Recently, Jack “Khang” Le, another high-functioning adult, joined Foy’s dynamic duo at the Triton. Foy is hopeful he will be able to land a job soon.

“I [use being teased as a kid] as positive motivation,” said Le. “Nowadays I’m trying to be a role model for kids to look up to because there are a lot of people that think like me…For me, my disability is not a disability.”

Foy, Matthews, Florang, and Le are grateful for the opportunities that have presented themselves – most notably the volunteering that they do at the museum.

“That’s one of the things I appreciate about Carmen [Pascual, volunteer coordinator at the Triton] because I didn’t expect her to say yes,” said Foy. “I just threw it out there and was used to hearing no or we’re full and she said, ‘you know, we can work something out even if it’s paper shredding.’ When she said ‘I’ll work with you’ I was so thrilled…There’s nothing too small or too big and their skills can continuously grow.”

Foy tirelessly looks for companies who will give her clients a chance – whether it be paid or volunteer work because she believes in her clients and they believe in themselves.

Pascual agrees. “It’s been a real delight because they’re reliable – you can count on them – they do their job and they’re really dependable,” she said. “I know they’ll be here. I just give them the job and they take care of it. I don’t have to micro-manage them…There’s no limit and I think with them coming into the museum proves that there is no limit. Every business, every place, needs volunteers because you need the support of the community. We need the support of the community but we need to support our community. It’s a two-way thing.”

Businesses interested in speaking to Foy about the program should contact her at efoy@ciwp.org. Those interested in learning about CIWP can visit www.ciwp.org for more information.

Community
Author Cynthia ChengPosted on June 8, 2019
It was raining on May 18 but that couldn’t dampen spirits at Sunnyvale’s 34th annual Hands on the Arts Festival. Instead the annual art...

Community
Author Jacob BournePosted on August 11, 2021
On Sat. July 31, a group of about 40 bicyclists hit the road to raise awareness in support of adding continuous bike lanes along...
Community
Author Carolyn SchukPosted on March 30, 2016
Glow-in-the-Dark Egg & Scavenger Hunt- Saturday, March 26, 7-10pm: Search for clues and race around the library and in Rivermark Village in teams of...
SPONSORED