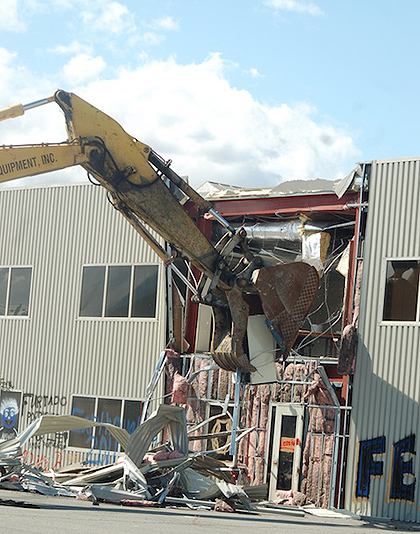 Before fans and local dignitaries, San Jose City Councilman Sam Liccardo, channeling former President Ronald Regan, demanded San Jose Earthquakes’ managing partner Keith Wolff instruct Devcon Construction to ‘tear down this wall’. It was a phrase Earthquakes fans had been waiting to hear. After losing the Quakes to Houston, then bringing them back to the Bay Area, fans and front office staff alike have dreamed of a stadium to call their own. On March 3, the first step toward that dream became a reality when the Quakes broke ground on the new field by tearing down buildings at the old Food Machinery Corporation site, adjacent to the Quakes’ Nutrilite Training Center, off Coleman Avenue in San Jose.

While the Quakes currently play at Buck Shaw Stadium on the campus of Santa Clara University, it isn’t ‘home’. The locker room is located offsite in the Leavey Center, the pavement could use work, the parking is horrendous, and despite being a decent field, the SCU campus isn’t what most would consider a great sporting venue. However, because of last Thursday’s Demolition Day ceremony, the Quakes should soon have a place to call home.

Demolition Day kicked off the first leg of deconstructing the buildings on the FMC site. The event started with a welcome speech from Earthquakes’ President Dave Kaval, General Manager John Doyle, and addresses from members of the San Jose City Council. Then the fun began. To the tune of the A-Team theme song, an M2 Bradley tank rolled in carrying members of the Earthquakes including Golden Boot Winner Chris Wondolowski. Soon after, a PC750LC excavator shocked attendees by pounding its massive claw into the pavement and creating a “did you feel that?” earthquake moment.

The demolition was staged. After a wall on the north side of the factory was torn down, the excavator reached into the newly created hole and pulled out what appeared to be a refrigerator. The operator delicately placed it on the ground before pummeling it into bits. The machine then went back into the hole, grabbed a round office table and dropped it to the ground. The spectacle sent a wave of snickers throughout the crowd.

The process of tearing down the FMC buildings will take approximately 12 weeks and cost $3 million. During that time, the Earthquakes will continue to secure funding for the new stadium, which will cost around $60 million and is set to be one of the few privately funded fields in Major League Soccer. Once built, the venue will be intimate, much like current Buck Shaw Stadium, and seat approximately 15,000 fans with 3,000 standing room only “seats”.

In the meantime, the Earthquakes will play the 2011 season at Santa Clara University. The season is set to kickoff on Saturday, March 19 against Real Salt Lake.

Community
Author Carolyn SchukPosted on May 30, 2012
Lots of media people say lots of things about radio talk show host George Noory, whose late-night Coast to Coast AM (coasttocoastam.com) is currently...

Community
Author Joel CarricoPosted on August 19, 2019
A mix of volunteers and City of Santa Clara staff gave their time to help out on a hot day with upkeep and maintenance...
SPONSORED