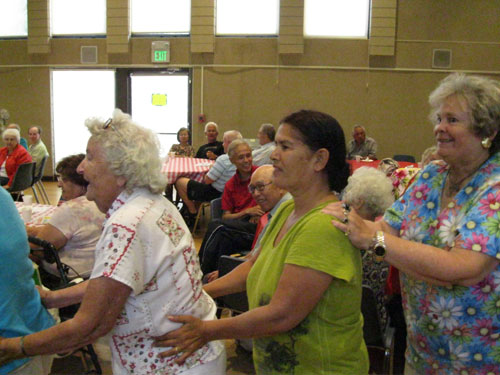 The year was 1972. A gallon of gas cost 55 cents. “Here’s Lucy” was one of the most popular television shows. Richard Nixon, then U.S. President, ordered the start of the space shuttle program.

“More than 3,000 bowls of ice cream have been served during our ice cream socials,” noted Director of Parks and Recreation James Teixeira in his opening speech. “About 16,000 seniors take part in the senior programs in Santa Clara each month.”

The event also featured a slideshow of the history of the Senior Center, music by the Peninsula Banjo Band, dancing and even a conga line. “I like to sing along,” says long time Senior Center volunteer Tillie Goldsberry – a senior herself.

“I am a Santa Clara resident for about 40-something years and come to the Senior Center all the time to swim,” Jack Creedon says, tapping his feet to the beat. “It is good exercise. I sit up in front here because I like this music.”

The Peninsula Banjo Band has been playing at the Santa Clara Ice Cream Social for the last 14 years. Their mission is preserving the four-string banjo and its music, and the group is known for their program of Dixieland, Ragtime, and music of the early twentieth century.

In addition to banjo-players, Betty Jean Miller plays the gutbucket – a wash bucket with two legs and a shovel stick from the local hardware store rising out of it. The shovel stick holds a bass D string. Miller provides one part of the rhythm section and has played this unusual instrument for 10 years.

“Others are invited to join the band,” says band member Jim Strickland. “It is a wonderful retirement activity.”

Deborah Ali, a newcomer to Santa Clara, is very pleased with the festivities. “I moved here in March this year. Today is my first day in the Senior Center. How generous to have music and cake and ice cream for us! They also allowed people with canes and wheelchairs to go to the front of the line. How thoughtful!” she beams.

Nathan Bernstein speaks for most of the people at the Ice Cream Social. “Everybody feels good just to be with people our age,” he says.

For more information about the Peninsula Banjo Band, visit www.PeninsulaBanjoBand.com. Banjo players interested in playing with the band should come to Harry’s Hofbrau at 390 Saratoga Ave., San Jose any Wednesday from 7:00 to 8:30 p.m. and talk to a band member.

Community
Author Cynthia ChengPosted on October 7, 2018October 5, 2018
From Sept. 20-22, big plastic bins containing lace and linens occupied The Lace Museum (at 552 S. Murphy Ave. in Sunnyvale) for its Semi-Annual...
City Politics Community
Author Carolyn SchukPosted on September 9, 2015
How do the 2014-15 stadium financials compare to forecasts made before Levi’s Stadium was built? The short answer is, better than anyone dreamed. It’s...