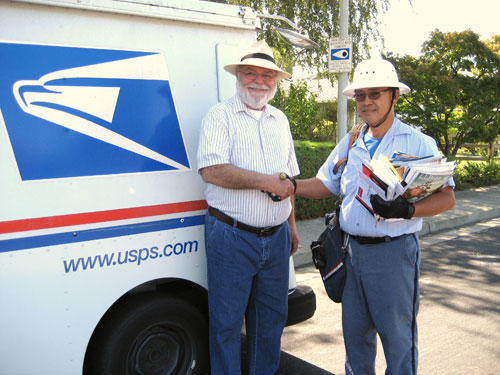 An alert mail carrier and a fast-acting neighbor with a camera saved the day in a quiet Santa Clara neighborhood of well-kept, modest homes where you wouldn’t expect a break-in. Enrico Legaspi was standing behind his mail truck about 10:30 a.m. August 6 when he noticed suspicious activity a few houses away on the next block.

“Two men looked different than the owners, and they were cutting a screen at the front of the house,” says Legaspi. “This isn’t good, and it was in my area. If they can finish their job they can come back.”

Legaspi told a neighbor working in his front yard about his suspicions.

“I grabbed my camera and took pictures with a telephoto lens of nearby vehicles on the street near the house and called 911 to alert the police,” says Ken, the neighbor. Ellen, his wife, observed two males run out of the house with a large plastic bag, jump into a car, and speed away.

The Santa Clara police arrived quickly and broadcast an alert with the car license number from Ken’s photo. In less than an hour, San Jose police located the car and took two juvenile suspects into custody.

“I was really happy I could give critical information to the police immediately,” says Ken. “And I’m happy the guys were apprehended before they could dump everything they stole.” Electronics were recovered. Missing jewelry, however, had already been disposed of.

“I was truly pleased at the level of response and professionalism of the police department,” says Ellen, commending Sergeant Richard Fitting, Officer Steve Ernst, and other assisting officers.

The day after the break-in, Forest Park neighbors gathered for their annual National Neighborhood Night Out.

“We impressed on everyone that if we’re vigilant, we can make a difference,” says Ken. “We’re lucky to have our neighborhood watch person, Julie. She’s very involved in our community.” Julie shares neighborhood news, including crime alerts, via e-mail.

“It’s unsettling. As cautious as we are, people can break in. If we didn’t have our neighbors looking out for each other, the robbers would still be free and continuing their activities,” says Ron, who lives across the street from the burglarized house. “It’s all part of our neighborhood watch.”

“Someplace around the country every day, a letter carrier has come to the aid of a customer or resident—put out a fire, found a lost child, rescued a pet, or performed CPR,” says Augustine Ruiz, Jr, US Postal Spokesperson for the Bay-Valley District. “Letter carriers are the informal eyes and ears of the neighborhood they serve.”

“I commend Mr. Legaspi’s diligence and sharp senses at this time when we are asking more and more of our letter carriers in the eight-hour work day,” says Santa Clara Postmaster Richard Keppeler.

The Santa Clara Police Department received reports of three other residential burglaries in the surrounding area, and investigators are reviewing the cases to determine whether the arrested juveniles, both San Jose residents, were involved.

“Mr. Legaspi’s familiarity with the neighborhood, alertness and swift action were critical in resolving this crime,” says Lt. Matt Hogan with the police department.

“I’m happy I was able to help. I’m trying to get to know everybody on my route,” says Legaspi, who has been a mail carrier for eight years. “It’s part of my life, observing everything.”

“I never thought this would happen. It woke us all up. We need to be more alert,” says Jahan, the resident whose family’s home was burglarized.

Geof Goodfellow: A Man Who Lived Up to His Name