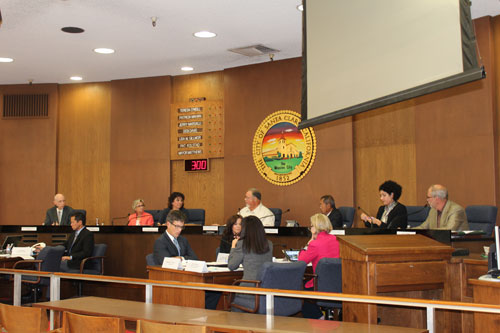 Passionate residents spoke out at the meeting of the Santa Clara RDA Successor Oversight Board Meeting at City Hall on Monday, September 23. Ciara Balagot presented a petition signed by over 1,100 people supporting the library. Erica Ramirez, age 8, shared that she would like to conduct research for school assignments at the library someday. Raj Chahal announced that Assemblymember Bob Wieckowski and President of the Santa Clara County Board of Supervisors Ken Yeager support the Northside Library as a “government purpose asset.”

“Why did the city try to use redevelopment funds even after the Supreme Court unanimously upheld the right of the legislature to dissolve redevelopment agencies?” says Micaela Ochoa, a member of the Oversight Board. “The City of Santa Clara chose to use a restricted source of funds to build the library even after the legislature froze that funding source. For this reason, the city is faced with an order to reimburse the money. A court order was required to stop the city’s unauthorized activity using the RDA funds.”

Mahan disagrees with the claim that the city misused funds to build the library.

“When the RDAs were dissolved, in an attempt to protect the restricted funds, the money we collected up until 2009 [ for the library], we transferred to the foundation; we gave that money to the library’s foundation so it was under contract in the hopes of complying with the law, not trying to go against the law,” Mahan says. “We knew that money was not any money that came to our RDA after the dissolution. None of those funds are post-dissolution funds. I want to make that clear.”

“We began this process of setting aside money for the library in the capital improvement project long before ABx1 26, [the Redevelopment Agency Dissolution] concerning the restriction of using RDA money, came about,” says Dan Beerman, public communications manager for the City of Santa Clara. “From what I gather of what Patricia said during the meeting, we decided to move that funding forward out to the foundation so we could still complete the project as it had been planned.”

“I am extremely disappointed in the cowardice shown by the majority of the board who were unwilling to authorize the board attorney to find a common language of support they could all agree on,” says Maria Daane, executive director of the Santa Clara City Library Foundation and Friends. “This Sunday, we’re hosting a public event to build a milk crate library [and accept donated books] in front of the beautiful $12 million unopened library.”

Visit saveournorthsidelibrary.com for updates about the Northside Library.

SERVE ON A COMMISSION TO CONTRIBUTE TO QUALITY OF LIFE

City Politics
Author Erika TownePosted on November 28, 2022
During the Planning Commission meeting on Oct. 26, the Commission approved the tentative subdivision map for the Development Area Plan (DAP) for the Related...
SPONSORED