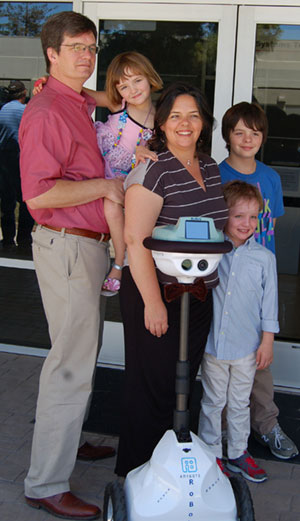 Like many his age, Peter enjoys playing video games, playing football, spending time with his family, and believes robots are the ultimate gadgets.

Beginning at age two, Peter’s congenital heart defect caused his heart to begin failing. While waiting for a transplant, his condition worsened and a coma was induced from which Peter had to be resuscitated. Following that, his liver began failing, which threatened to postpone the heart transplant. After receiving a new heart, he spent 100 days in the pediatric intensive care unit – re-learning how to walk. On his eighth birthday, Peter was diagnosed with an adult form of lymphoma. Treatment is complicated due to medications taken for his heart and a lung condition.

While battling the disease courageously, Peter recently visited AnyBots, a robotics company headquartered in Santa Clara, where in addition to seeing robots in action and learning how they operate, he was given RoBob, his own personal robot, which will allow him to virtually be in class even when he cannot.

“I love it. It’s really cool,” exclaimed Peter when RoBob was unveiled.

Peter’s fascination with robots started with seeing the movie Real Steel, which features robots that can mimic each other and fight.

“One of the best things about granting wishes is building in the element of surprise and wonder. We hope that bringing Peter to Anybots and letting him see how his robot is made will be a delightful surprise after years of medical challenges” said Make-A-Wish Greater Bay Area Executive Director, Patricia Wilson. 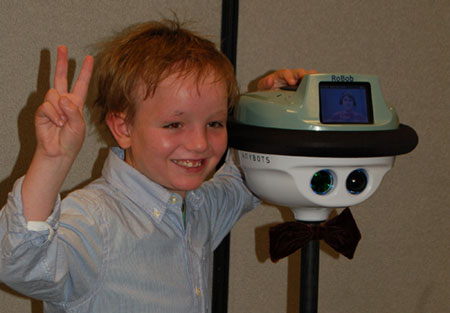 “It is truly a pleasure and a privilege to be a part of helping make Peter’s wish a reality through Make-A-Wish,” said Anybots CEO, David Rogan. “Spending time with such a courageous and wonderful young man is an inspiration to all of us at Anybots, and demonstrates one of our robots’ most gratifying use cases.”

Make-A-Wish Greater Bay Area grants the wishes of children with life-threatening medical conditions “to enrich the human experience with hope, strength and joy.” As one of the largest chapters nationwide, the Greater Bay Area chapter grants over 300 wishes per year and has granted over 6,000 wishes in its history. For more information, visit www.SF.Wish.org.