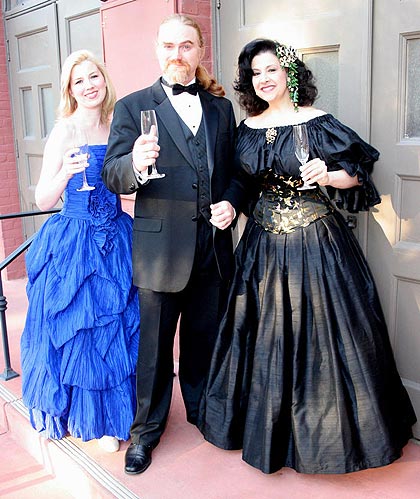 Opera is the most costly of all the performing arts to stage. So an economic depression would seem like a bad time to start a new opera company.

That’s not how Opera Bravura founder Sharon Maxwell sees it. In her view there’s a crying need for opera that’s audience-friendly – in other words, fun for the average person. “There are a lot of people, who, when asked if they like opera will say no,” Maxwell explains. “And if you ask why, they say, ‘it’s too long,’ ‘it’s in a foreign language,’ ‘I don’t know what’s going on.'”

Maxwell’s Opera bravura takes on those challenges. Instead of performing full-length operas, Opera Bravura’s shows feature opera’s most entertaining scenes – all fully staged and in full costume, with translations on a full-size screen for easier readability. “A full verse is seen on the screen,” she explains. “That means that people can read it, and then put their attention on the singer – it’s much less distracting than supertitles.”

A graduate of the Julliard School and originally from Long Island, NY, Maxwell came to the Bay Area in the 1987 to sing with the San Francisco Opera chorus. &I thought it would just be for one season,” she recalls. &But I liked it and decided to stay and pursue a solo career.”

Since then Maxwell has appeared with many Bay Area companies, including Opera San Jose, Lamplighters, West Bay Opera and Santa Clara’s own Mission City Opera. In 2010 she sang Mimi in MCO’s production of Puccini’s La Boheme.

The original idea for Opera Bravura had its genesis in a concert that Maxwell produced years ago with a friend. Now she’s building a professional company around that core idea and, she reports, working night and day.

One of the featured singers is the soprano Diane Squires, a favorite with Mission City Opera audiences. Squires is known for her sparkling performances, most recently in last year’s MCO production of La Boheme.

The show’s venue – San Jose’s First Unitarian Church – was chosen for its intimacy, Maxwell explains. “It’s a very unique place. It looks like a European opera house. It’s round with a cupola, and seats are semi-circle around the center. The acoustics are wonderful.”

The success of Opera Bravura’s debut, Maxwell says, won’t be measured by money. (Indeed, Maxwell expects to lose money this first time out of the gate). “The measure of success is to start something and see it through to completion. The mark of success is to get people to come. I want to show people that opera and opera singers are fun to watch.”

What: Opera Bravura “Love, Lust, Revenge and Death”
When: Saturday, May 21st at 7:30pm
Where: First Unitarian Church of San Jose, 160 N. Third Street, San Jose, 95112
Tickets: $26. Purchase at OperaBravura.org via PayPal, through Artsopolis (www.artsopolis.com), or at the door.