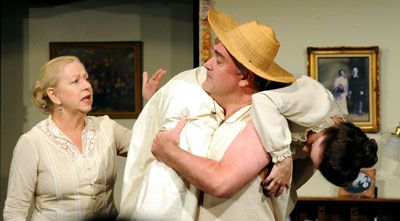 It’s a cool 104 degrees on Christmas Day and the banging from the mending of the roof at first seems like someone knocking at the door. Welcome to French Guiana, where the residents of the island move about with convicts from a local French penal colony. The play opens on the living room of Felix and Emilie Ducotel, performed by Ryk Houseman and Pat Cross. Felix is a businessman and shop owner, although “businessman” might not be the best way to describe his ability to run his store. A kind soul, he continually allows customers to pay for items on credit but doesn’t have the backbone to actually collect what’s due. Enjoying the heat of the island is the ever-optimistic Marie Louise, the Ducotel’s daughter, delightfully played by Lorie Goulart.

The Ducotel’s life gets complicated with the arrival of a letter announcing Felix’s cousin and business sponsor, Henri Trochard and his nephew, Paul, are in the harbor waiting to get through quarantine. Henri takes on the role of scrooge, who seems to be there to take the shop away from Paul, just as he previously swindled Paul in France. The letter is a mixed blessing for Marie Louise, who, in a “love is blind” reason, is in love with Paul. However, Paul, being a spineless wretch, who is afraid to stand up to his uncle, delivers news of his engagement to an heiress in the letter, which almost sounds more like a modern-day “Dear Jane”. Marie Louise is heart-broken over the news and it’s in these types of scenes where Goulart shines. Beyond just verbally acting, she also emotes facial expressions that say so much more than her words.

Just when things seem to be at their absolute breaking point, three angels arrive to offer guidance, a helping hand, and even a less than angelic solution to the Ducotel’s problems. The angels of course, are three convicts who are tasked with repairing the roof of the Ducotel’s house and they have been privy to the goings on below them. Finding Mary Louise unconscious on the floor, Joseph, played by Bob Siegmann, reads the letter to Jules (Steve Corelis) and Alfred (Steve Lewis) who come to the aid of the Ducotel’s by first, having Alfred “convince” Marie Louise to not act harshly and take her own life. Alfred, Joseph and Jules have committed crimes that make them less than reputable, but quickly get so involved in the Ducotel’s life that there’s no stopping them.

Penned by Sam and Bella Spewack, My Three Angels is a charming Christmas tale that would make even the most heartless scrooge smile. Angels made it to the big screen in the 1955 movie, “We’re No Angels” starring Humphrey Bogart, Aldo Ray, Peter Ustinov and Basil Rathbone. The acting in Angels is first rate and is easily ranks among the best performances by the Santa Clara Players. There are still several more opportunities to see My Three Angels with shows on November 10, 11, 12 17, 18 and 19 at 8pm and on November 13 at 2:30pm. For more information, please visit the Santa Clara Players’ website – www.scplayers.org.

Every Mouse Has Its Day

Arts & Entertainment
Author Diane AndrewsPosted on February 27, 2020March 6, 2020
The Triton Museum of Art, founded in 1965, is a gem that continues to sparkle as it uplifts Greater Bay Area artists. It opened...

Arts & Entertainment
Author Alissa ReyesPosted on January 6, 2017
Congratulations to everyone who got engaged during “proposal season!” After you’ve had some time to enjoy your engagement bliss, it’s time embark on the...