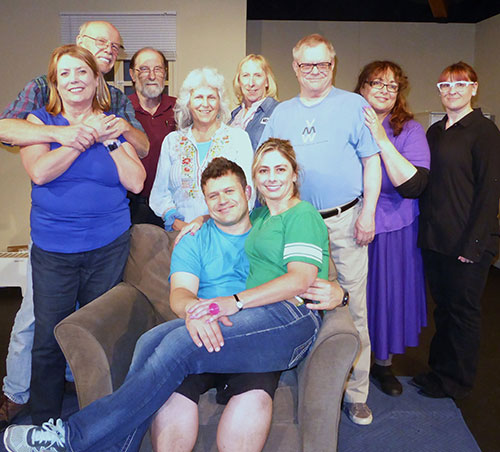 The timing for the Santa Clara Players production of the sweet, romantic comedy “Things My Mother Taught Me” by Katherine DiSavino is perfect. It opened May 12 on Mother’s Day weekend and runs through June 3, with 11 performances. The comedy of young love and relationships between adult children and their parents and future in-laws will keep you laughing and stir up memories that linger after the show.

Olivia and Gabe, an unmarried couple in their 30s, decide to live together and move from New York City to Chicago, driving a U-haul filled with all their worldly possessions. Moving day is full of surprises, complications and resulting laughs.

The complications start from the opening scene when a wide armchair–the first and the only piece of furniture that the couple purchased together–remains stuck in the narrow doorway of their new and otherwise empty apartment. Max, their Polish landlady (played by Marie Ballentine), feigns not understanding English to avoid helping them out.

Then things really get complicated when Olivia (Jaime Wolf) and Gabe (Devon Grover) get a surprise visit from their well-intentioned parents, who roll up their sleeves to help the couple move into the apartment, dispensing advice all the while.

“In learning to accept life as it is at the moment, you don’t have to like it, but you have to accept it and be creative about how you’re going to solve a problem. It may be impossible right now, but that may change, so don’t give up,” continued Piper.

With the non-profit Santa Clara Players (SCP), you’re guaranteed good-natured laughter at the foibles of human nature and relationships in an intimate setting. As seasoned SCP actor Bob Siegmann said of the 71-seat venue, “It’s like the audience is in someone’s living room.”

“I think the show is very professional. The actors really understand their parts and know how to play them,” said audience member Duncan Nanney from San Jose at dress rehearsal.

“You don’t know how much you take after your own parents and how they’ve affected you until you get older. You often don’t appreciate them until you get a little perspective on life yourself,” said “Things My Mother Taught Me” director Piper.

“You have made wonderful, strong, intelligent choices,” said Karen to her daughter near the play’s end. “I was so worried about you making my mistakes that I didn’t see you were following my advice all along.”

Performances take place in the Hall Pavilion, 1511 Warburton Ave., behind the Triton Museum of Art. For show dates and reservations, visit www.scplayers.org or call (408) 248-7993.

The SCP’s summer show is a powerful, new play benefitting the YWCA Crisis Intervention Center. “Extremities” by William Mastrosimone is described as a gripping drama portraying an attempted rape and its aftermath. It contains graphic language. “Extremities” runs July 6 through July 22, with after-show discussions with the YWCA July 7, 15 and 22.