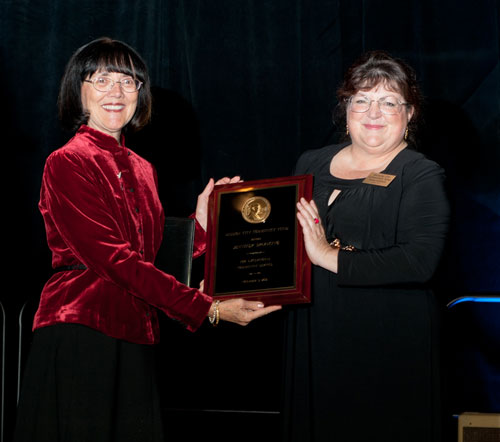 Saturday night, November 3, was the place to be in Santa Clara as community and business leaders and citizens of Santa Clara and the surrounding communities came together at the Santa Clara Convention Center for the 26th Annual Charity Auction Dinner Dance benefiting the Mission City Community Fund. The event serves as a backdrop to honor the recipients of the Austen Warburton Community Service and the George Burdick Business Awards.

Jennifer Sparacino, Santa Clara’s long-time and recently-retired City Manager, received the Austen Warburton Community Service Award (AWCSA). Sparacino received the award for her service to the Santa Clara community as City Manager for the past 25 years and her 12 years of prior service in other positions with the City. The award is given to individuals or organizations that “exemplify the spirit and character of Mission City Community Fund founder Austen Warburton,” according to the event program. An attorney, civic leader, educator, historian, and philanthropist, Warburton’s many community contributions are the cornerstone for making our already outstanding community an even better place to live. Sparacino distinguished herself by working with more than 24 City Council members and implementing their policy directions during her tenure. Her reputation for being honest and forthright is known in Santa Clara as well as neighboring cities.

Anthony “Tony” Avelar was this year’s recipient of the George Burdick Business Award. Avelar, the owner and president of Santa Clara Realty, arrived in Santa Clara in 1968 from a Portuguese Island in the Azores. He got his start in real estate with the purchase of a duplex. That’s when he met the late Frank Barcells, the former owner of Santa Clara Realty, who encouraged Avelar to get his real estate license. Over the past 10 years, Tony has been in the top 10 of all real estate sales people in Santa Clara County and is recognized by his peers and his professional associates. Avelar has a long list of notable work he’s done, from serving as President of the Santa Clara Lions Club, to serving as Vice President of the Portuguese Chamber of Commerce, to serving as Director of the Santa Clara Sporting Club, and being a Board Member of the Portuguese Band.

Formed in 1986 as a 501(c)3 tax-exempt non-profit, the Mission City Community Fund (MCCF) was created to help replace shrinking federal financial support for much-needed community programs. MCCF’s objective is “to enrich the quality of life for our community’s residents” by focusing on five areas of giving: social services; education; healthcare; theater and arts; and the environment. MCCF grants help senior citizens with transportation, housing and medical services. MCCF also gives grants “…to the YMCA, the Emergency Housing Consortium, Next Door Solutions, InnVision and the local police departments [to] help family members dealing with homelessness, abuse, rape and domestic violence.” Grant applications are accepted throughout the year.