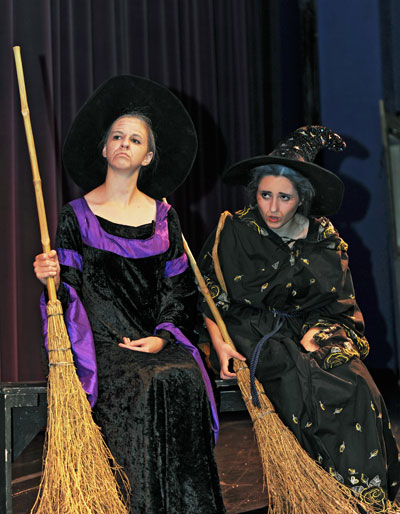 “I hate opera!” During an opera, that is probably the one line anyone in the audience would least suspect they’d hear an actor on stage declare. Yet, it is a line that is not just uttered, but bellowed out during one of the more dramatic scenes in Maskerade. Maskerade, another terrific production of the Wilcox Stage Company, began its limited engagement run at the Mission City Center for the Performing Arts in Santa Clara on Thursday, November 9 with shows running through Saturday, November 19.

Originally authored by Terry Pratchett and adapted for the stage by Stephen Briggs, Maskerade pokes fun at Phantom of the Opera as well as almost everything from community-theater to Broadway musicals. The plot is filled with twists and turns and more than the occasional groaner-joke waiting for someone to ask a question to bring about the punch line. “My dog has no nose” is oft-repeated during one seemingly improbably scene, only no one ever says “How does he smell?” Other groaner lines fill the play, but they add to the charm of this production.

A better way to describe the action is to say it’s a play within a play as the audience bears witness to the show within the show. However, there are enough plot twists that the audience needs to pay attention, lest they fall behind. The show within the show is amusing on its own, with scenes including a singer and dancers silently performing the opera towards the back of the stage. While that’s going on, the real action takes place center-stage. Everything from hidden doors to box seats that no one sits in on opening night, to cats that transform into people and back to cats again, to seemingly impossibly spicy food to best-selling books on snacks.

Masks take on new meaning as Walter shows the many facets of his personality. The first makes itself known showing him as someone that is easily ignored, and considered a simpleton; the second while wearing a tangible mask; yet another when it’s revealed he can write wonderful music for an opera and yet another when he dons an invisible mask, which transforms him into the same person he is with the tangible mask – someone of great stature and confidence. In a nod to – or perhaps a mockery of – Phantom of the Opera, the Opera House is inhabited by a ghost, who up until recently, had been considered a lucky thing. However, the accidents are now referred to as “the kind of accidents you prefer to call…accidents.” There’s even a chandelier hanging over the stage with a line uttered about how dangerous it would be if it were to suddenly fall down.

There’s still time to catch Maskerade at the Mission City Center for the Performing Arts in Santa Clara this Thursday through Saturday at 7pm. Tickets are $10 for adults and $6 for children. Further information is available by emailing wilcox_stageco@yahoo.com. But be careful to pay attention – there’s a lot happening and it’s definitely worthwhile keeping up with the action.