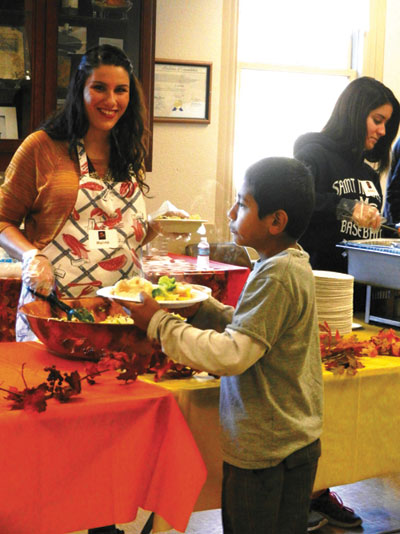 Within the first hour, the Marsalli family and a handful of volunteers had served Thanksgiving dinner to over 300 of Santa Clara’s neediest families at St. Claire Parish Hall on Lexington Street. And, the dinners didn’t stop coming.

“We hope we can go over 800 this year,” said Larry Marsalli. “We started in 2007 and had 100 people, but last year we had over 600 and we also send out meals to the USO – we send them food for all of the fellows that are in transit in the service.”

It was the sixth community meal put on by the Marsalli family. “[When we started], I was remodeling my kitchen so it was perfect timing and we said, ‘Let’s do it,'” said Denise Bachur, one of Marsalli’s children. “We said to [Jerry], ‘go get the church’…They said ‘OK’ and that was it…We celebrate every holiday, every birthday together so it’s just nice that we can get together one of those times and do something good”

“Another reason we started as that I’ve always been in Santa Clara and there was nowhere to go,” said Marsalli. “In San Jose, there are three or four kitchens you can go eat – Sunnyvale has it, Mountain View has it, Los Gatos has it – but there was nothing in Santa Clara. I wanted to do something for our people…now we have the whole family involved.”

Three generations of Marsallis and over 75 volunteers helped make Thanksgiving special for many members of the community who either wouldn’t normally be able to have a turkey dinner with all of the trimmings or were alone on the holiday.

“To me the best story that I ran into was last year,” said Marsalli. “I had this family come in – two little boys and a girl and they were eating like there was no tomorrow – they were just shoveling it in. So I finally said to them ‘take it easy, guys. You can get more if you want. Take your time. You can have all you want.’ And I said, ‘you have to save room for dessert.’ And the little guy, he looked at me and he said, ‘you mean, we get dessert too.’ And, I mean, it just breaks your heart to hear them talk like that. So I said, ‘you see that table up in the front? That’s all desserts – there’s cakes, there’s cookies, there’s pies, and there’s even ice cream.’ And the one little guy he stopped and he said, ‘you mean we get ice cream too?’ It broke my heart but we try to help those kids. We don’t turn anyone down. I’ll never turn anyone down. If they come in, I don’t care where they’re from or what they do, if they’re hungry, they can come. We keep growing and growing each year.”

The Marsalli family prepared for the Thanksgiving feast with 300 pounds of turkey and over 100 pounds each of mashed potatoes, vegetables, and stuffing – a feat that wouldn’t have been possible without the generous donations of hundreds of Santa Clarans and local businesses. “People just write checks – they see [Jerry] and they hand him $10,” said Bachur. “It’s wonderful. It’s a lot of money from a lot of people. It’s truly a community event.”

The Marsalli Family Foundation is a 501(c) non-profit organization. For additional information or to donate to next year’s meal, email turkeydnr@gmail.com.