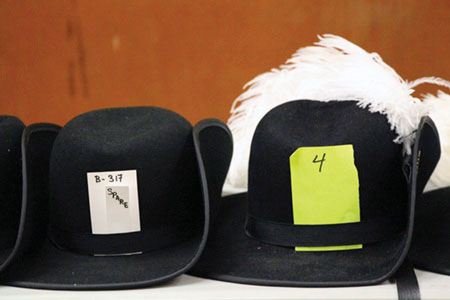 So much work goes into the splendor that is a Drum Corps International show, that the teams start planning for the next year immediately after the awards are handed out. It’s the same for every drum corps across the country and the Santa Clara Vanguard is no different.

Every year, the seven members of the design team meet in Roswell, New Mexico within weeks of the final performance in August to start tossing out ideas for the following year’s show. They then have weekly conference calls to work out the details.

“We get together and we discuss various programs that might work for the following year,” said Sal Salas, color guard coordinator. “We listen to music. We talk about concepts. We talk about things and we want to make sure that we stay engaged in what the audience wants – what our students want. We want to be able to provide them with challenging programs, but at the same time, we want to maintain what is The Vanguard – the traditions, the innovation and the state of art that they bring to the activity. Far and above that, it’s about entertainment. We want to make sure that the audience is getting the most bang for their buck.” 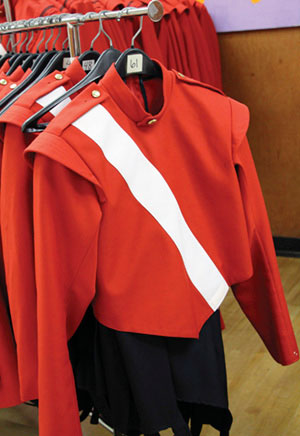 Last year, the team came up with the concept of Les Mis, but instead of retelling the story, they focused on conveying an emotion. This year, they wanted to capture some of the same magic that gave The Vanguard a fourth place finish at the world championship – only push it farther with the hopes of taking home the top spot.

Salas is hard at work putting the costumes together – looking at last year’s red drum corps uniforms and coming up with innovative ways to make them look different. He’s also talking to the costume designer to come up with the color guard’s look.

“It’s a little tricky,” he said, “but it’s one of those challenges that you go, ‘oh, let’s see what we can do with this.’ That’s what I’m doing right now … We’re going to make [last year’s costume] different. We’re going to change the look of it one way or another.”

Additionally, Salas is in the process of designing the show. He will decide how long the color guard uses the props, work with the choreographers on staging, and figure out what design elements are needed. And, throughout the season the team will make changes to the program, so the show shown at exhibitions early in the year will be very different from the program performed at the championships. “We go all the way through the end of August,” he said. “Even the week before we’re making changes … We’re constantly making changes.”

Although this season’s show won’t be announced until March (Vanguard is waiting to obtain all of the necessary licensing), Salas gave an inside scoop. “It will involve new props and a different use of props that people haven’t done before. I think that it will have the whole gamut of emotions. It will be exciting. It will pull at your heartstrings. It will bring a memory that people can latch onto that says Santa Clara, and I think that it will be the next step … We’re not going to rest on what we did before. We’re going to keep those elements and move forward in terms of what we do.” Keep an eye on Vanguard’s Facebook page (http://www.facebook.com/SCV) for updates and the formal show announcement.