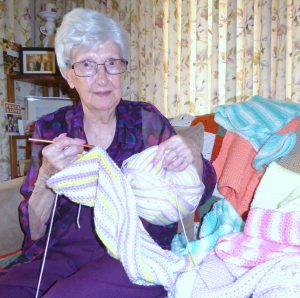 At 100 years old on June 29, life-time Santa Clara resident Lorraine Freitas, whose parents were born on Madeira Island, Portugal, has enough stories to fill a book–and remembers them all.

She shares her stories with her nieces, nephews and their families, who threw a surprise birthday party for her on June 24 at the Portuguese Hall in Santa Clara. Mayor Lisa Gillmor, one of the 100 guests, presented Freitas with a Proclamation from the City.

Freitas, who lives independently in her childhood home and just renewed her driver’s license for five years, remembers when the streets of Santa Clara weren’t paved and the valley was called “the Valley of Heart’s Delight.” She remembers earning $100 at her first job the summer she turned nine by “cutting ‘cots” (apricots) for drying at California Packing Corporation.

After attending St. Clare Elementary School, Santa Clara, and Notre Dame High School, San Jose, Freitas, who never married, worked for 23 years as an office manager and then 17 years in accounting for FMC Corporation, retiring at 67.

She enjoys reading mysteries, watching sports on TV and already this year has knit and crocheted 10 sets of baby blankets and matching hats to donate to new-born infants.

She has travelled widely, including a cruise last year to St. Petersburg, Russia with her niece Julie Wagner, who lives next door. Freitas is fluent in Portuguese and English and thinks all children should learn another language.

The centenarian goes on monthly bus trips to casinos and has a Mississippi River Cruise in mind for her next big adventure but says of the future, “I just do one day at a time now.”

“God made a beautiful world for us to enjoy,” said Freitas. “I like to see everything. Everywhere you go is so different. But I’ll tell you, there is no place like Santa Clara.”