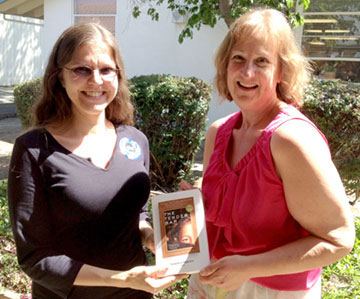 Imagine receiving a brand-new book written by a best-selling author for free, without any strings attached. This year, the internationally celebrated World Book Night fell on April 23rd. On this day, selected volunteers gave away free books to strangers in their communities with the intent to promote reading among those who don’t read regularly. The free books were made available by the generosity of participating publishers and authors.

Rachel Rein, a resident of Santa Clara, gave away books at Westwood Elementary School when she picked up her daughter from the school.

“It was interesting to see the variety of responses I got from people,” says Rein, an aspiring entrepreneur in the genetics industry. “There was a lot of enthusiasm and delight, though a few people were wary [about being offered a free book].”

Having traded some of her books with another volunteer, Rein ended up with two titles to give away; one was The No. 1 Ladies’ Detective Agency, written by Alexander McCall Smith, and the other was The Tender Bar, written by J.R. Moehringer.

Jenny Gonzales gave away copies of Bossypants, written by Tina Fey. She left her books at a number of places, including the Valley Fair Mall and a local Safeway store near her work place. Gonzales works as a production supervisor at Progressive Solutions, a Santa Clara company.

“I put little cards in my books to encourage the people who find the book to go on Twitter or Instagram to share their experience of finding the book,” Gonzales says. “I’ve already had one person who found one of my books put up a picture on Instagram. He said thanks.”

Pat Lawson-North, the executive director of Vision Literacy, went to the Elmwood Correctional Facility in Milpitas to drop off copies of The House on Mango Street, written by Sandra Cisneros.

“We gave the books to the staff at Elmwood and they were very excited to get the books for the inmates,” Lawson-North says.

Pam van Hylckama Vlieg, an agent with Foreword Literary, walked around a mall in San Jose’s Oak Grove area to give away copies of Good Omens, written by Neil Gaiman and Terry Pratchett.

“There was a boy who was sitting in a video game shop, and he said he’d never read a Neil Gaiman book, although he had read his comics. So I gave him a book,” van Hylckama Vlieg says. “We live in South San Jose. [We live around] an economically depressed area where books are considered lendable items. It’s very important for everyone to know they can own a book.”

Not only do book recipients get the thrill of owning a book, they also have an activity to look forward to.

“This will be the first book I’ll read this summer,” says Joan Clancy, a first-grade teacher who received a book at Westwood Elementary School.

Cynthia Cheng was a volunteer for World Book Night. At the Rivermark Plaza in Santa Clara, she gave away 20 copies of Middle Grade, The Worst Years of My Life, written by James Patterson and Chris Tebbetts, and illustrated by Laura Park. Visit http://www.us.worldbooknight.org for more information.