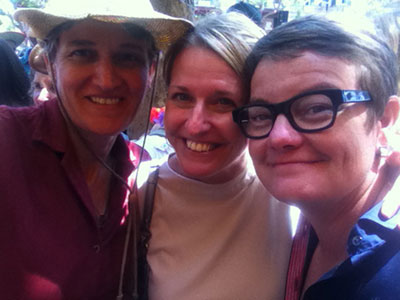 Jamie McLeod, a former Santa Clara city council member, has a few words to say about the recent U.S. Supreme Court decisions to overturn the Defense of Marriage Act (DOMA) and dismiss the appeal to enforce Proposition 8, both considered by some to be discriminatory pieces of legislation intended to challenge same-sex marriage.

“When I first heard the news, as a lesbian, I felt great joy and relief, and as an American, I felt great pride,” McLeod says. “Both times I took the oath of office [as council member], I felt I was committing to defend a Constitution that did not fully recognize me as an American. And last week on Wednesday, when the U.S. Supreme Court gave its ruling, it felt like the Constitution now ultimately protects me. What’s important for me is the message that this sends to LGBT youth. [The ruling] tells them they, like all other kids, can dream big for their future.”

Someone who is dreaming big for his future is Jonathan Pham, a young gay Santa Clara resident. Pham is an alumnus of Wilcox High School, and is currently studying Behavioral Sciences at DeAnza College. He hopes to be a teacher someday. Previously concerned about restrictions on hospital visitation rights among gay couples, Pham is relieved by the repeal of DOMA.

“Right now, being 20 [years old], marriage isn’t the first thing on my mind, but I’m glad that now I have the opportunity to get married if I want to,” Pham says. “I don’t define marriage as gay [or straight] marriage anymore. It’s just marriage.”

“With the repeal of DOMA, we are very excited that our relationships can be recognized at the federal level,” says Greg Belaus, who is gay and president of the board of directors at the Billy DeFrank LGBT Community Center. “This is a wonderful step forward.”