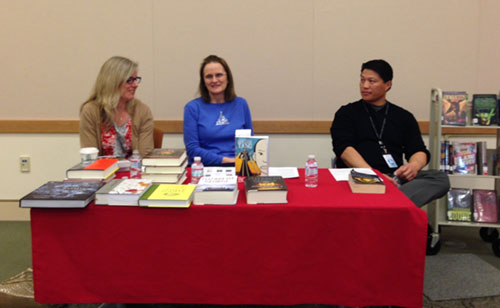 With the gift-giving season around the corner, it makes sense that people should begin searching for suitable and practical gifts right now. At the holiday book talk hosted by the Santa Clara Central Park Library on November 5, an adult librarian, a children’s librarian, and a sales manager from Random House shared their book ideas for gift giving. Free books were raffled off to attendees.

“The main purpose of the event is to chat about the best books to give during the holidays,” says Shanti Bhaskaran, the library’s literacy program supervisor. “This is one in a series of book forums we’ve done in partnership with Random House and with the Santa Clara City Library Foundation & Friends.”

“One of my favorites is ‘A Tale for the Time Being’ by Ruth Ozeki. It’s the fictional story of a diary washed ashore in a Hello Kitty lunchbox, and the profound effect it has on the woman who discovers it,” Boyle says. “The diary is from a young girl living in Japan. The girl was born in Sunnyvale. When she was in middle school, her family had to relocate to Japan. The parents are Japanese, but the girl is [American born Japanese]. In Japan, the girl gets bullied. The woman who finds the diary is an artist living off British Columbia. The girl and the woman’s interwoven tale is about resilience and bravery.”

Allen Chin, youth services librarian, shared his list of favorite reads for children, which included sports books by Jake Maddox and “Poacher Panic” by Jan Burchett, a book in the Wild Rescue series that spotlights endangered animals. Because the audience didn’t express interest in science fiction for children, Chin didn’t get to share about a novel he recommends for “reluctant young male readers” called “The Resisters” by Eric Nylund.

“‘The Resisters’ is about Ethan Blackwood, a 12 year-old, and he along with other children battle these aliens who have brainwashed the adults,” Chin says. “It’s the classic alien invasion story, but the fun twist is that the adult minds have been hypnotized or brainwashed. So the adults’ survival is dependent on the kids thwarting the alien conquest. It’s a great story for third to sixth grade readers.”

Also sitting on the panel during the book talk was Jenn Ramage, a district sales manager with Random House.