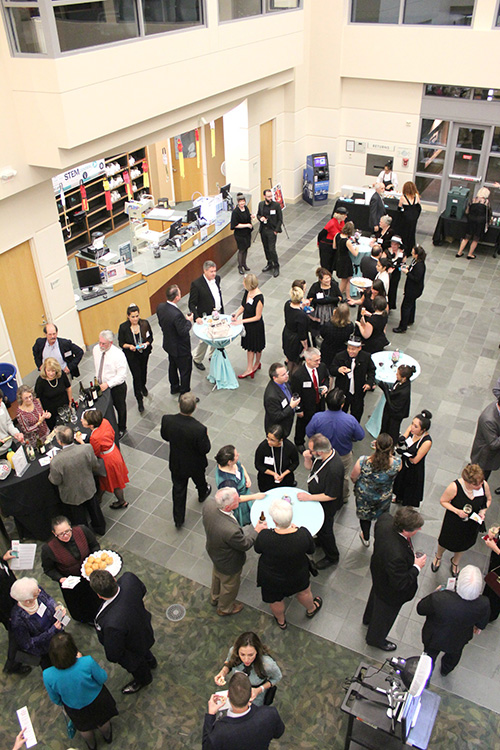 Inside Central Park Library on the evening of Feb. 4, a jazz trio from the Santa Clara Vanguard played Henry Mancini’s dreamy “Moon River.” The pale blue hue of a Tiffany’s gift box covered the tables. Women received tiaras and strings of faux pearls and men got pocket squares for their jackets. Breakfast themed hors d’oeuvres were served for dinner– menu items included savory bagel chunks with smoked salmon garnished with crème fraîche, capers and dill, flavorful mini-quiches with ham and broccoli, and sweet waffle bites with strawberries, chocolate and cream. Sponsored by the Santa Clara City Library Foundation and Friends, the Breakfast at Tiffany’s Librarypalooza was in full swing with at least 150 attendees.

“The goal of tonight is to raise funds for programming here in the library, for things like Comic Con, performers and summer reading,” said Tracy Wingrove,  executive director of the Santa Clara City Library Foundation and Friends. “Tonight we’re also recognizing Judy and Jerry Nadler because of their long-time support of the library. Judy was involved in saving the Mission Library when the City Council was considering closing it and she was involved in planning for the construction of the Central Park Library. Jerry and Judy Nadler have also been generous donors. They established a Caldecott book collection here in honor of their daughter Arielle. Most recently, they funded Arielle’s Reading Corner.”

Judy Nadler is an ethics consultant, a former Mayor of Santa Clara and a former faculty member at Santa Clara University. Her husband Jerry is a retired judge. Not only did the Nadlers receive a crystal plaque from the Santa Clara City Library Foundation and Friends, this year’s Library Heroes also received certificates of recognition from Assemblymember Kansen Chu.

“I think either in a past life I was a librarian or in a future life I may be a librarian,” said Nadler after she was introduced to the attendees packed inside the Redwood Room. “I married a man who is also a library lover… I want to tell you that this building, the Mission branch and the Northside branch are extraordinary assets to our community. When people decide where they want to live, they often want to know about taxes, utilities. But they also want to know about libraries.”

After Nadler’s speech, professional auctioneer John Lumm facilitated the live auction. Items up for grabs included tickets to Hamilton, an interactive cooking demonstration and a group meal by Chef Cory Chen, dinner at Bourbon Steak & Pub, a subscription to Eat with the Seasons’ fresh farm produce, a family storytime for children hosted by family literacy librarian Ellin Klor and former city librarian Julie Passalaqua, a Hall Wineries group tour, a group lunch at Mission Bistro, San Jose Giants tickets and a VIP virtual reality lab experience with librarians. After the live auction, attendees were given the opportunity to offer cash bids to the Santa Clara City Library Foundation and Friends.

Supporters of the library didn’t just come from Santa Clara. Nadler shared that she had friends here from North Dakota and Minnesota who also offered generous cash bids.

About $40,000 was raised at the Breakfast at Tiffany’s Librarypalooza from ticket purchases, auction bids, cash bids, sponsorships and bookplate purchases. At www.lovethelibrary.org, the Santa Clara City Library Foundation and Friends will continue to offer the opportunity to purchase bookplates.

Community
Author Diane AndrewsPosted on August 8, 2012
“A garage sale is a fun, family type thing—cleaning your house of unwanted items, earning money, and getting to meet different people, including neighbors...

Community
Author Santa Clara WeeklyPosted on March 7, 2019
The American Red Cross has a severe shortage of type O blood and urges type O donors — as well as eligible blood and platelet...
Community
Author AdminPosted on January 26, 2011
Internet filtering and security products alone will not protect your kids from cyber bullies or worse. Education is a key part of the prevention....
SPONSORED