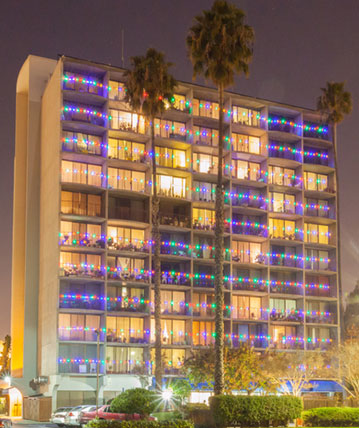 This year Liberty Towner’s holiday will shine green – not in color but in energy use. Santa Clara’s International Brotherhood of Electrical Workers (IBEW) Local #332 has donated new LED string lights for the entire Liberty Tower building. “We are so grateful to the IBEW Local for their generosity,” says Santa Clara Methodist Retirement Foundation Executive Director Pricilla Haynes.

In addition to enhancing the seasonal beauty, the energy-efficient lighting upgrade will cut Liberty Tower’s seasonal energy usage by 80 percent.

This year marks the 23rd year that the union has donated its members’ time and skills in making Liberty Tower a bright beacon of holiday spirit in the Santa Clara community.

In 1991, Sal Ventura and Norm Josephson from the IBEW Union Local #332 installed fuse boxes on the outsides of the building, making it easier to string the lights. Electrical companies in Sunnyvale and Cupertino donated materials for that project. Since 1991, the annual light show has been maintained by donations from new residents, and inspection and testing by the resident Holiday Lights Committee.

Headed by Sal Ventura and Wendell Weber this year, on Dec. 7 the pubic-spirited crew once again installed holiday lights on each resident balcony of the 11-story high-rise building and will take them down at the end of the season.

Shop With a PAL Lifts Joy for the Holidays