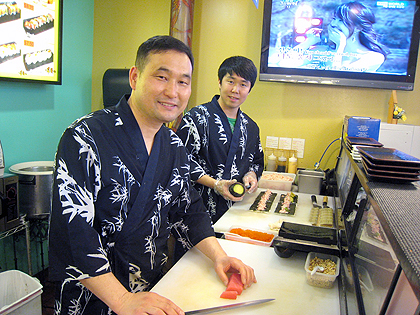 At lunchtime, the Lawrence Plaza at 3561 El Camino Real is packed. Some people wait in line for a hot roasted sweet potato at the sweet potato stall outside the plaza’s supermarket. Others grab a quick bite to eat at the cheery Asian-themed food court. In recent years, the Lawrence Plaza has transformed from being a semi-empty business space to a favorite dining spot for many locals, including members of the growing Korean American community.

“Business has been good,” says Benjamin Song, the owner’s husband at Oec Sushi. “A lot of people like Japanese food, even people from other cultures.”

The booth next to Oec Sushi is Nak Kung, where Korean-style Chinese food is served.

“Our main specialties are the soy bean noodle, spicy seafood noodle soup, our sweet and sour pork or chicken, and our sweet and spicy chicken,” says Yeon Seo, an employee of Nak Kung.

Several Korean-themed booths occupy the food court. One of them is Dishes, which serves fried dumplings. Another booth is Seoul Jung, known for its tofu soup and rice dishes.

“Our most popular dish is our tofu soup, which comes with seafood, beef, pork, vegetables, kim chee, and mushrooms,” says Gloria Seo, who works behind the counter at Seoul Jung. “People also like our bibimbap- it’s a rice dish served in a clay pot with crispy rice, vegetables, beef or chicken, and an egg.”

“Our popular entrees include the spicy pork, sliced short ribs, chicken teriyaki, and kim chee fried rice,” says Jaeyoon Park, an employee of BBQ Town. According to Park, most of the entrees are accompanied by rice, salad, tofu, sprouts, and kim chee.

After their meal, diners can check out the flavors of gelato at Café Milan, another booth at the food court. Or they might take a short stroll over to Paris Baguette, located in a charming café adjacent to the complex. At Paris Baguette, patrons can nibble on a selection of fancy French-inspired desserts over a cup of coffee or tea.

“People come for our pastries baked fresh every day,” says Toby Yi, manager of Paris Baguette, an international Asian bakery that incorporates French influences in its desserts. “Our short cakes and whole cakes are popular. Customer favorites are the blueberry chiffon cakes and fruit fresh cream cakes, which are also sold by the slice. We serve many kinds of coffees. In the summer, we’d also be offering shaved ice, which comes in green tea and mixed fruit flavors.”

Shopping Santa Clara: Decorate With Original Art on Any Budget