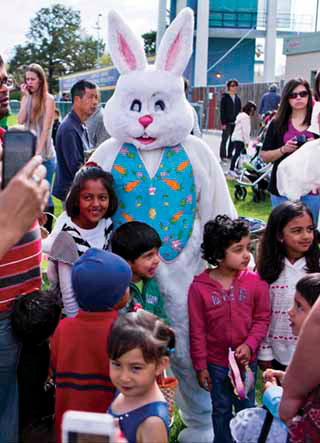 “Egg hunts make me think of a store opening on Black Friday,” says Thomas Mohr, a Santa Clara resident, minutes before the 39th annual Easter egg hunt began at Central Park on March 30. Mohr is referring to the wild race among the attending children to snatch the candy-filled plastic eggs all over the grass once the boundary tape is lifted.

While waiting for the hunt to begin, Mohr’s three year-old daughter and four year-old son waved their canvas bags painted with splashes of orange.

“This is my first hunt with the city though my children have participated in other Easter egg hunts before,” Mohr says. “It looks like it’s going to be crazy when it starts. The symbolism [of Easter egg hunts] is lost on me. I’ve forgotten why candy and eggs have anything to do with Christ rising from the cross. But we’d go along with [this activity.] It’s exciting to do this as a group.”

Rumor had it that the actual egg hunt would last for less than a minute, so many families arrived about an hour before the hunt began. Visitors who came early had plenty to do. Parents searched for the Easter Bunny. Children got their faces painted by affiliates of Roberta Jones Junior Theatre. Fans greeted Miss Santa Clara 2013 Molly Crawford and other local titleholders.

Sponsored by the Santa Clara Kiwanis, Santa Clara Elks Lodge #2347, South Bay Church, and Santa Clara Parks & Recreation Department, the egg hunt has been known to draw massive numbers in past years, and this year was no different. 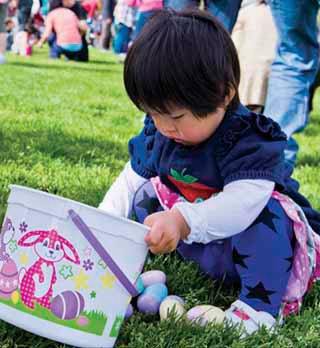 At the event, other attendees shared their thoughts on the Easter egg hunt.

For Akash Patnaik, a Santa Clara resident, attending the city egg hunt has been a tradition for him and his family. Standing beside Patnaik on the grass was his four year-old daughter, who clutched a pink butterfly basket. Minutes before the egg hunt began, she eagerly scanned the field to spot the pastel-colored, plastic eggs.

“This is my fourth egg hunt in the city of Santa Clara,” Patnaik says. “People from all over the world come here. It’s a good community event.”

Matt Gallagher, a member of South Bay Church, volunteered at the Easter egg hunt to assist and reach out to others on behalf of his organization.

“One of the missions of our church is to be part of the community and to help out where we can, to be of service to others, and represent Jesus’ teachings to others,” Gallagher says.

Gallagher and other volunteers arrived at Central Park early in the morning to set up the balloons and the perimeters of the hunt for each age category, put up signs, and “hide” the eggs. According to Gallagher, about 12,000 eggs were scattered throughout the grass for the hunt.