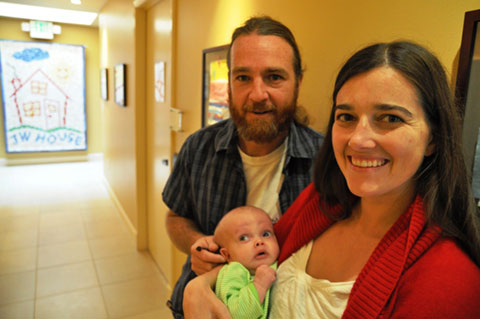 Her name is Persephone and while that name has roots in Greek mythology, this little girl is not a myth. She’s from the Hawaiian Islands, very real, and very alive, thanks to Kaiser Permanente’s integration, coordination, and specialty doctors. And, today, 3-month-old Persephone Edelhertz is in Santa Clara, Calif., at the welcoming JW House family residence at Kaiser Permanente, being held by her smiling mom and dad, and recovering from a near fatal brain tumor.

“Everyone here at Santa Clara was amazing,” said mother Astrid Senturia. She glanced at her daughter, whose head is still slightly misshapen but her eyes are wide open now. The family was sitting in the light-filled dining area of the family residence, just a few days after a complex, high-risk operation removed a egg-sized brain tumor from Persephone. A round, surgical marking was on the side of her head.

“We started noticing her head was growing large at around six weeks,” said dad Shayne Edelhertz. “At first, we thought it might be just a fluid buildup, but an MRI revealed a large mass.”

The family’s Kaiser Permanente physicians in Hawaii diagnosed Persephone with what’s called a choroid plexus papilloma, a rare and dangerous growth within the ventricle of the brain where cerebrospinal fluid is produced.

Back in Hawaii, Persephone’s head was becoming large and misshapen as the tumor grew inside her brain.

“At one point, we could only see the whites of her eyes, which had started rolling back because of the pressure in her skull,” said Edelhertz. “Persephone seemed to be withdrawing away from us.”

The distressed family took Persephone to Oahu for a consultation with a Kaiser Permanente adult neurosurgeon. He knew the case called for the expertise of a pediatric neurosurgeon and so on a Saturday afternoon, he contacted Duncan, who immediately agreed to operate on Persephone.

“Dr. Duncan called us on the phone Saturday and talked to us,” said Edelhertz “He was very reassuring and confident that it would be a successful surgery.”

But there was no time to waste. The family flew to the mainland that week. They got a room at JW House. Dr. Jason Snitzer of the inpatient pediatrics department admitted Persephone to the hospital.

“Between the JW House staff and Dr. Snitzer, we couldn’t have asked for a warmer, more loving welcome,” said Senturia. “Surgery was set for the next morning, so the reception was so comforting”

But there was a momentary glitch: it was suddenly discovered there was a conflict between the family’s state-reimbursed Kaiser Permanente membership in Hawaii, and the state reimbursement rules in California. But Santa Clara leadership agreed to let the operation proceed.

“The Kaiser Permanente family stepped up to the plate,” said Duncan. “I’m confident I removed all the tumor and now Persephone’s on the road to recovery.”

“She was awake after surgery,” said Senturia. “We held her. Her eyes were open. Her head was much smaller.”

“It was like she was here again,” said Edelhertz, eyeing his infant daughter.

Persephone is recovering so well, the family has returned to Hawaii.

Dig The Scene for Summer Camp