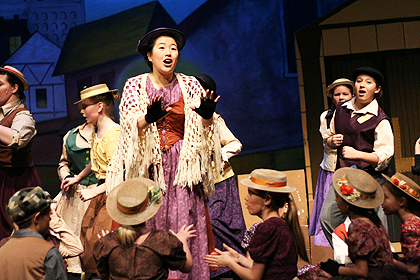 Turning a Cockney flower girl into a proper English lady is no easy task, and yet phoneticist Henry Higgins tireless works with Eliza Doolittle to prove his superiority in the Roberta Jones Junior Theater’s production of My Fair Lady.

Higgins (Christopher Morton) runs into Eliza (Andrea Uyeda), as she is peddling her flowers to a man on the street. The man, unbeknown to Higgins, is linguist Colonel Pickering (Rusty Ravenscraft). Upon finding out who the other is, Higgins and Pickering discuss their fondness for each other and retreat to Higgins’ home only to have Eliza show up and ask for lessons so she can become a lady in a flower shop. After initially turning Eliza away, Higgins realizes that by making over a common girl, his life’s work would be complete and he would truly be the best in the business.

After tirelessly working hours on end, Higgins and Pickering take Eliza to the Embassy Ball as a final test of her newfound knowledge. If she can fool the King and Queen of Transylvania and Hungarian phonetician Zoltan Karpathy, she will not only be able to act the part of a lady, but Higgins will receive all the praise he anxiously desires.

The evening is a success. Eliza fools Karpathy into thinking she was born Hungarian and everyone else into thinking she was born on the right side of town. Higgins bathes in the praise given to him by Pickering while Eliza sits back and fumes over the lack of appreciation for her hard work. Eliza leaves and visits Higgins’ mother where she explains that Higgins never treated her like more than a flower girl, while Pickering always treated her like a lady. Higgins shows up and claims the contrary. Eliza proclaims her independence and professes her love, but Higgins is unable to return the sentiment, but tells Eliza he wishes for her to remain at his house. Higgins returns home without Eliza and plays recordings of her. As he listens from his chair, the phonograph turns off and a real voice replaces the silence. Eliza has returned and Higgins will no longer be alone.

Any performance of this classic production can easily be scrutinized. Fans of the play, or even the film, will have various performances in their mind and constantly compare what they see on stage to what they believe to be the best version of this musical. And while some may think junior theater is something to scoff at because the actors aren’t as polished as adults, they are in for a surprise. The Roberta Jones Junior Theater’s production of My Fair Lady does not disappoint.

Uyeda is delightful as Eliza. Her facial expressions are fantastic and the longing look on her face when she is practicing the phrase “cup of tea” (“cup, cup, cup, cup, of, of, of, of) his memorable. Her vocal range, especially in the higher octaves, is quite impressive.

Morton and Ravenscraft make a wonderful team as Higgins and Pickering. Both play uptight Englishmen, Ravenscraft as the kinder, more gentle Pickering and Morton as the cold, confirmed bachelor Higgins, quite well. Morton’s rendition of “I’m an Ordinary Man” was entertaining and the pair really sold the performance of “You Did It.”

The star of the show, however, had to be Christopher La Placa as Eliza’s drunkard of a father, Alfred P. Doolittle. He was charming and absolutely nailed every aspect of his part. His version of “With a Little Bit of Luck” was also one of the better musical performances of the evening.

The show as a whole was superb. It’s amazing that 6-13 year olds have this much talent and drive and are able to put out such a quality performance.

Only one more weekend of My Fair Lady remains. Tickets are still available for all three shows (Friday and Saturday at 7 p.m. and Sunday at 2 p.m.) and can be purchased through www.rjjt.org. Tickets are $8 for adults and $5 for children.

My Summer Story AKA It Runs in the Family / Film released in 1994 not rated in it’s current version.

Arts & Entertainment
Author Alissa ReyesPosted on July 19, 2017
The warm weather and sunny skies of summer inspire us to get out there, learn something new, and meet new people. However, enjoying summer...
Arts & Entertainment
Author Karl ScottPosted on July 6, 2011
Cars 2 is a sequel to Cars (2006) which, as we know now, should have been called Cars 1. All the primary car characters...

Arts & Entertainment
Author Travis SwiatloPosted on December 16, 2015
One of the definitions of family is “a group of individuals living under one roof…” and the Santa Clara Players’ unquestionably showcased that on...
SPONSORED