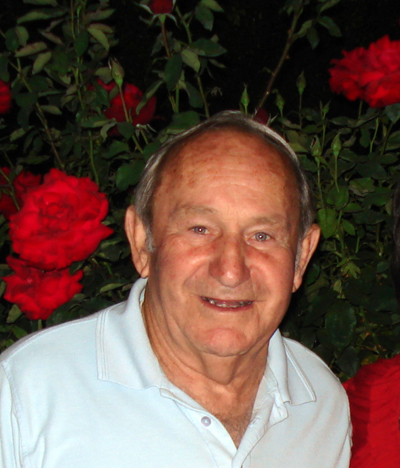 Long before becoming the technology center that we know today, Santa Clara was a vital component in an area known not for semiconductors, but instead for its multitude of family orchards. On July 22, Santa Clara lost a link to its agricultural past with the passing of Joe Freitas. Born in a family home on Market St. in 1928, Joe began a life that would leave an indelible mark on all those who knew him. The youngest son of Madeiran emigrants, Anton and Virginia Freitas, he devoted his life to serving his family and community.

The first half of his life was spent maintaining a family pear orchard near the banks of the Guadalupe on Laurelwood Rd.  During that time, he also served his country in the aftermath of WWII and, upon returning home, started a family with his late wife Marie. Always generous, he frequently donated fruit from the orchard to the Carmelite Monastery – a group that was very dear to his heart.

His love for community and desire to make a difference was further evidenced by the many years he spent coaching baseball at Youth Village. More than just a coach, Joe helped lay the foundations upon which many youngsters would transform into adults. He was often moved by chance meetings with his former players.  He loved seeing them as grown men – often with their own children in tow – and took great pride in still being called “Coach”.

Joe loved Santa Clara University and supported the Bronco Football and Basketball teams for many years, often making road trips with the teams.  Many lifelong friendships were forged by this involvement, and cheering on the teams while wearing Santa Clara Red always provided him with great delight.

Joe’s death will certainly leave a void in the lives of those who knew and loved him. However, the impact he left on all of their lives will forever fill their hearts.

Just Say No to Salary