On Saturday, March 7 at about 4:25 pm, the Sunnyvale Department of Public Safety (DPS) received a report of a shooting near the intersection of Homestead Road and Linnet Lane in Sunnyvale. Officers arrived and located an adult male deceased in a vehicle and an adult female suffering from a non-life-threatening gunshot wound. The female victim was transported to an area hospital for medical treatment and is expected to survive.

The suspect and the victims were involved in a minor vehicle collision near Homestead Road and Linnet Lane. The male victim pulled onto Linnet Lane to exchange information when the shooting immediately occurred. The suspect is believed to have fired several rounds into the victim’s vehicle.

The suspect, identified as Jason Tahara, a 23-year-old San Jose resident, was located in San Jose and taken into custody by the San Jose Police Department less than three hours later, at approximately 6:52 pm.

During the arrest, officers observed a suspicious item in the vehicle near a propane tank. As a precautionary measure, the San Jose Police Department Bomb Unit was requested to ensure there were no explosive devices in the vehicle. No explosives were found. 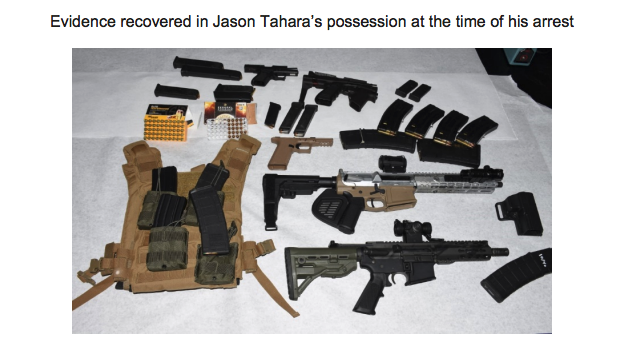 On Sunday, March 8 at about 0100 hours, detectives executed a search warrant at Jason Tahara’s residence, located in the 1100 block of Krebs Ct., in San Jose. During the search, officers located several tactical rifle parts. Detectives believe Jason Tahara was possibly building and modifying tactical style rifles in his home. The handgun used in the homicide is not registered and has no serial number.

All indications are that Tahara did not know the victims. The names of the victims were not released at the time of publication.

There are no outstanding suspects.

Anyone with information regarding this incident is asked to contact Sunnyvale Department of Public Safety Detective Ben Holt at (408) 730-7143 or bholt@sunnyvale.ca.gov.