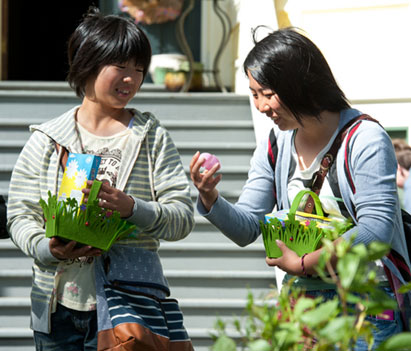 Cheery sunshine, blue skies, and a crisp spring breeze marked Easter morning in Santa Clara. This year, 14 visiting students from Izumo, Japan, one of Santa Clara’s sister cities, celebrated Easter with their host families and members of the Santa Clara Sister Cities Association. What made the celebration particularly special for the visitors was that Pat Mahan, the city’s vice-mayor, hosted a party in their honor at her home. Also present at the party were City Council Member Debi Davis and former City Council Member Will Kennedy.

“We have middle school and high school children here from Izumo, and they happen to be here on an Easter Sunday,” says Mahan. “We decided to teach them about the American tradition of the Easter egg hunt. They don’t have Easter egg hunts in Japan.” The Easter Bunny hid eggs and boxed chocolate bunnies in Mahan’s front yard.

During the hunt, students explored the front yard, found eggs, and dropped them into felt baskets. After the hunt, they examined their treats over tea and refreshments.

Ritsuko Yamamoto, an English instructor and director of the International Exchange Association of Izumo, accompanied the students on the trip.

“This is the biggest event here of the week,” Yamamoto says. “It’s wonderful for my students here to experience a custom, a Christian custom, from a different country.”

The Easter party was another memory the students will be able to look back on from their visit to the city. They left on Monday after a six-day visit in which they spent two nights in hotels and four nights with host families.

“I’d like to thank all the host families and the people who helped us with the tour,” says Yuki Ikezi, vice president of Izumo relations for the Santa Clara Sister Cities Association. During their stay, the students visited a number of locations, including city hall, the local fire department and police station, and the Japanese American Museum in San Jose.

Kathy Watanabe, a member of the Santa Clara Sister Cities Association, hosted two Japanese girls, ages 14 and 15, in her home.

“We took the girls to Great America and they loved the rides; you don’t need to understand English to understand fun,” Watanabe says. “The girls made dinner for us last night. They insisted on it. My daughter watched them and she helped cut up the cabbage. It’s such a wonderful cultural experience for the kids to learn from one another.”

Raj Chahal, vice president of the Santa Clara Sister Cities Association and a city planning commissioner, also hosted a student in his home.

“The other morning, I took her to the Sikh temple,” Chahal says. “I also took her to Stanford and Google. Later today, we’re going to the [Mystery Spot] in Santa Cruz and the Big Basin Redwoods State Park.”

Ajaipal, Raj’s son, is the freshman co-president at Santa Clara High School. Having a visitor in his home has been an educational experience for him.

“We’re teaching Yui, our visiting student, a lot about American culture, and I’m learning a lot about Japanese culture,” Ajaipal says. “We like to compare how things are in Japan and in America.”

Community
Author Suzy PaluzziPosted on August 29, 2012
Have you ever wondered who does the decorating at the Triton Museum’s Gift Shop? The colorful, eye-pleasing display is the work of volunteer Carmen...

Community
Author Alissa SorotenPosted on May 15, 2020
The County of Santa Clara Public Health Department now recommends that workers who have frequent interaction with members of the public get tested at...
Community
Author AdminPosted on September 11, 2013
100 Years Ago: Santa Clara News (September 2, 1913) * Santa Clara Water Supply is Misused: Water Being Wasted in Shameful Way *Commercial League...
SPONSORED