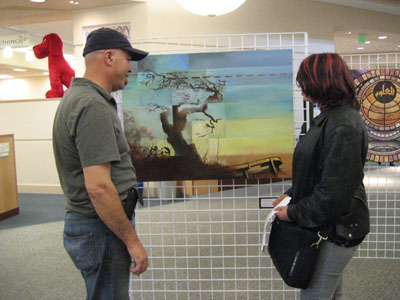 “We saw a need to have a show of Islamic Art as it has evolved in different forms, not just the traditional, classic art,” says Nabeela Raza Sajjad, founder of the nonprofit Islamic Art Exhibit (IAE), now in its third year in the Bay Area.

“The Miracles of Qur’an,” the sacred book of Islam, is the theme and inspiration for a collection of about fifty pieces by artists in the Muslim community. The exhibit is on display at the Santa Clara Central Park Library, 2635 Homestead Road, through the end of May.

Islamic art is an ancient and overlooked artistic tradition according to the IAE, and the exhibit offers a window into its evolution from traditional to modern, now using media such as photography, digitally enhanced collages, and acrylics.

Santa Claran Said Rahimi and his daughter Sophy contemplated the artwork on display in the lobby, admiring the repeating patterns and Arabic calligraphy in some of the pieces.

“It’s beautiful art and culture and religion all together,” says Rahimi. “It is peaceful and clears the mind….It has universal appeal.”

“It shows the beauty of the writing,” adds Sophy.

“We have a huge Muslim population, and one of the main mosques is in Santa Clara,” says Sajjad. “The Islamic Art Exhibit gives Muslim artists a platform to share their talents with the community.”

Information about the artists represented in “The Miracles of Qur’an” is in a binder located at the library’s park-side information desk (near the cafe). View IAE information online at www.islamicartexhibit.com. The Muslim Community Association mosque is at 3003 Scott Boulevard. Information: www.mcabayarea.org.

Community
Author Cynthia ChengPosted on March 23, 2016
Imagine a world where snow and ice have not existed for many generations and water has become such a limited resource that wars are...