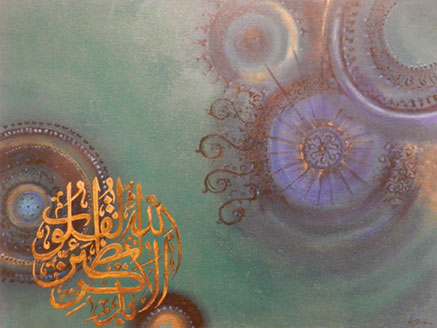 Since the tragic events on September 11, 2001, many have shunned the entire Muslim community. Narrow-minded people taken that event and based their opinion of an entire religion on the acts of a few extremists. It’s akin to basing a belief of Christianity on the teachings of the Westboro Baptist Church. While reshaping an opinion won’t happen overnight, the Triton Museum of Art is doing its part by showcasing Islamic artists in its current show, Echoes of Islam.

“News of the Islamic world proliferates in the media, which often neglects to share the richness and diversity of their traditions,” reads the description of the show. “Throughout history Islamic artists, scholars, and philosophers have produced works of astounding beauty and insight, which in turn have influenced their western counterparts, just as they themselves have shared in the visions of other cultures. The Triton Museum of Art is pleased to be working with Islamic Art Exhibit in the planning and presentation of Echoes of Islam, an exhibition of works by contemporary artists whose work is inspired by, informed by, or presents themes and cultural influences of Islamic art and cultures…[It] celebrates a vibrant facet of our community and the artistic richness they add to our region.”

“Like the circles in this piece, we go in circles in life, in search of comfort and solace to fill the void that exists within us,” reads the statement next to Shaikh’s piece, The Missing Peace. “It is a search that often time consumes us, as we struggle to feel our hearts at rest. As Ibn al-Qayyim al-Jawziyya beautifully states, ‘Truly in the heart there is a void that cannot be removed except with the happiness of knowing Allah and being true to Him. And in it there is an emptiness that cannot be filled except with love for Him and by turning to Him and always remembering Him. And if a person were given all of the world and what is in it, it would not fill this emptiness.’ This piece holds the answer, outside of the cycle of circles, and into the realm of Divinity.”

“Each artist separately called me to say thank you,” says Preston Metcalf, chief curator of the museum. “They all felt it was great for the community to see them in this light.”

Echoes of Islam runs through April 7 at the Triton Museum of Art, 1505 Warburton Ave. Visit www.tritonmuseum.org for additional information.

Humanity on Display at Triton