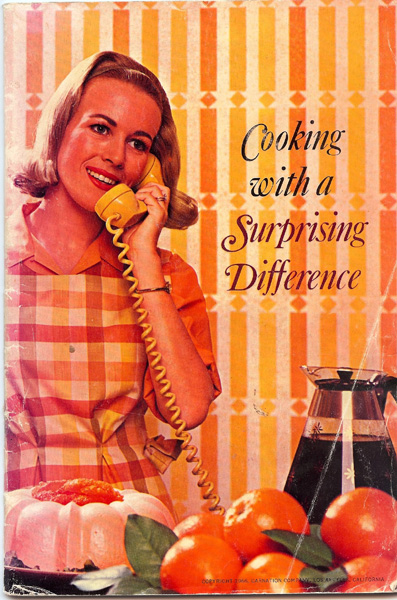 Some of my readers may know that I’m a collector of mid-century women’s magazines. An accompanying interest is brand name cookbooks. But while a 1963 Joys of Jell-O first edition enjoys pride of place in my collection, it isn’t the brands, the vintage, or even the recipes that draw me like a trout to the lure of these pamphlets.

I acquired my first brand name cookbook at a Labor Day rummage sale in 1993 at St. Nicholas the Redeemer Church in Los Altos. That’s how memorable a find it was. The book in question – purchased for 25 cents, although, like Visa, it’s priceless – was Carnation’s 1966 volume, “Cooking With a Surprising Difference.”

“Turn out meals that earn compliments for your cooking with Carnation, the Velvetized evaporated milk!” No mere hawking of long shelf life, or freedom from the risks of milk-borne disease. It’s the entire cornucopia of post WWII suburban life that opens before you, the homemaker – and in this genre, “you” is always a Stepford-wifey “homemaker” – when your can-opener bites into the lid of that Carnation can.

And there’s no part of the American dream, it seems, that doesn’t need a velvetizing boost.

Celebrating a wedding anniversary? Likely, it’s all because of Carnation. “Let friends discover your food is almost as good as ‘mother’s home cooking.’ But don’t forget to admit Velvetized Carnation has helped you discover a few food tricks of your own.”

Parents? In a phrase that, these days, would be a red flag for a La Leche League attack, “Give them a happy, healthy start in life with Carnation formula.” And when they’re weaned, “Serve them nutritious soups and main dishes made with Carnation when there’s no other solution to the ‘WON’T drink my milk’ problem. Treat them to fun cooking with Velvetized Carnation. It makes picnic franks and chocolate icing something special.”

Even stale marriages – like stale cake – can be revivified with Velvetizing magic. Basic instructions are provided in case you’ve forgotten the honeymoon Omlette for Two recipe.

“Pack the children up for an overnight stay with a favorite aunt, grandmother or neighbor. Send along Sausage and Macaroni Shells and,” with ominous overtones of Invasion of the Body Snatchers, “let friends discover the creamy-goodness of Velvetized Carnation cooking.”

Hubby doesn’t escape the velvetizing onslaught. In copy that conjures images of frazzled copywriters typing frantically against a deadline, their creative souls anesthetized with non-stop infusions of Wild Turkey, Carnation goes all out for the romantic evening at home.

“For friend husband, prepare Crab Rarebit and cold cucumber-celery soup, tune up favorite records and revive the good old-fashioned art of conversation which used to flourish B.T. (that’s before television).”

After they finished the Carnation gig, I can visualize the copywriters tuning into the Million Dollar Movie on TV and hearing:

“Will you tell these fools I’m not crazy? Make them listen to me before it’s too late…Well, it started – for me, it started last Thursday… At first glance, everything looked the same. It wasn’t. Something evil had taken possession of the town.”

The Bourne Legacy / Rated PG-13 for violence and flirting

Opinion
Author Bob GoldmanPosted on February 16, 2011
Be honest now! If someone offered you an awesome new job at an up-and-coming company, with a significant increase in salary, with generous stock...

Opinion
Author Margaret LavinPosted on September 13, 2017
Over the lazy summer months it was easy to slack off on bedtime rituals. I am certainly guilty of postponing my tween’s bedtime in...
Opinion
Author Bob GoldmanPosted on July 18, 2012
I don’t mean to be a scold, but I have to say what I have to say — reader, I am very disappointed in...
SPONSORED