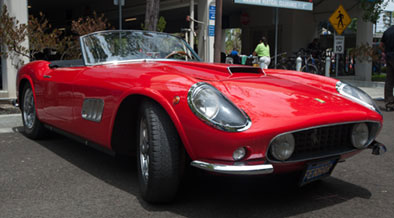 The 7th Annual Intel “Cool Wheels” Car Show was held on July 23 at Intel’s headquarters in Santa Clara. The show is one of the younger shows in the area, but the number of cars on display has grown from year to year and it’s quickly becoming recognized as a must-see show. One of the best features of the show is the ultra-low pressure to have your car look its absolute best. Not to say the cars didn’t look their absolute best, but the low-key nature of the show and friendly attitudes are helping make Intel’s show one of the preeminent in the area. The laid back nature of the show is exemplified by the very easy-to-enter-your car process – no entry fees, no awards, and no judging. Each participant received a welcome packet that included a ticket to a free BBQ lunch and free frozen yogurt from Pinkberry in Santa Clara, among other things. Plus, since the show was held during lunch and food was available onsite, it’s easy to see why this show has outdone itself year after year and become so popular.

As with past shows, there were a wide variety of cars and motorcycles on display. New cars included the Jaguar F-Type, Tesla Motors Model S, electric motorcycles by Zero Motorcycles as well as new cars from Cadillac, Porsche, and Land Rover. Older cars included a 1929 Ford Model A (that was used to take a driving test), 1968 Cadillac Eldorado Biarritz, 1959 Ferrari LWB California Spyder, 1959 Fiat 600 Multipla that was driven to and from Alaska to California by its owner on family vacations, pair of Amphicars, and several Tatras or Tatraplans – cars that were made in Czechoslovakia.