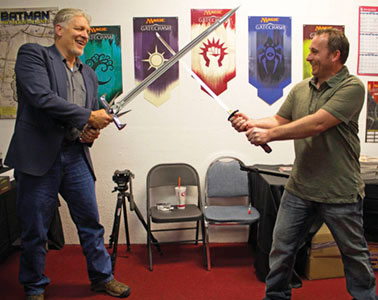 The road to Cinequest began in Santa Clara when stars of the film “Sparks” signed copies of the graphic novel the film was based on at Illusive Comics and Games on February 28.

The superhero noir thriller about a masked vigilante who discovers the dark side of heroism, stars Chase Williamson (John Dies at the End) as Ian Sparks, Clancy Brown (Shawshank Redemption) and William Katt (The Greatest American Hero). The three stars as well as the author, Christopher Folio, and artist, Tyler Endicott, signed autographs and took photos with fans to generate excitement for the film, which premiered March 1 at the California Theater in San Jose. For more information on the film visit http://www.sparksmovie.com/