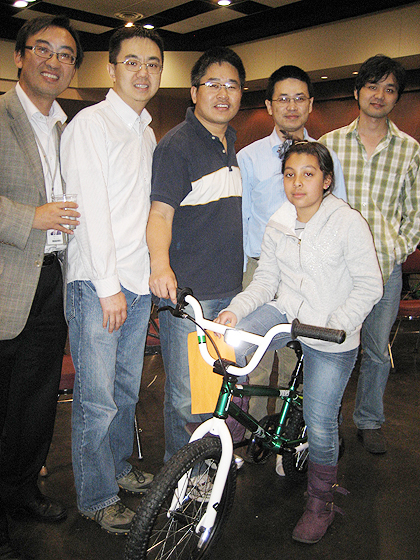 “Look, Mom! No hands!” Getting a two-wheel bike and learning how to ride it is a childhood rite of passage growing up in middle-class America. But it’s an experience not all children’s families can afford to provide for them. That’s where Huawei Technologies and Odyssey Teams, Inc., come in.

Huawei Technologies marked the opening of its North American Research and Development Headquarters in Santa Clara, 2330 Central Expressway, on April 5 with a ribbon cutting ceremony attended by the mayor. But that was just the start of the celebration.

About 400 Huawei Technologies employees from the U.S. and China were at the Santa Clara Convention Center two days later, participating in a three-day, all-hands meeting. The company had engaged Odyssey Teams, Inc., to present a philanthropic, teambuilding workshop with a planned surprise outcome. And who doesn’t like a surprise?

Seventy-nine teams of four to six employees were given the task of building a child’s bike in 45 minutes using limited tools. They never dreamed that they would present the assembled bikes that very afternoon to 79 low-income children from Boys & Girls Clubs of Silicon Valley (www.bgclub.org), a non-profit organization providing after-school programs for more than 2,800 youth in San Jose. It was a surprise to the children, too.

After the bikes were all assembled, the 79 children were marched into the convention center hall, where each excited child was matched with a team and a bike. Seven-year-old 1st grader Elijah was presented with his very first bike. The only other bike in his family, which includes two older and one younger brother, belongs to his dad, who doesn’t have a car and uses his bike for transportation rather than recreation.

“I feel great,” says nine-year-old, fourth grader Janet when asked how she felt about getting a new bike to replace the old one she has at home and shares with her siblings. The children also got bike locks and helmets.

Huawei Technologies (www.huawei.com), founded in 1987 in Shenzhen, China, is an employee-owned, telecom solutions provider. It is the second largest telecommunications equipment provider in the world. It provides telecom network infrastructure, application and software, devices and professional services. Huawei (USA), formerly known as Futurewei Technologies, was established in 2001.

“Santa Clara is the hub of Silicon Valley, and a lot of ex-patriots from China with their families live here. There are good schools,” says Lynch when asked why Huawei (USA) chose to locate in Santa Clara.

To celebrate its tenth year in the U.S., Huawei (USA) gave ten checks for $10,000 each to America’s Promise Alliance. The alliance was founded by General Colin L. Powell, the first African-American appointed as Secretary of State, to prepare children for college, work, and life.

Odyssey Teams, Inc. (www.odysseyteams.com), based in Chico and founded in 1991, provides team building and leadership skills workshops and coaching. Through its Life Cycles program, it has provided more than 10,000 bikes worldwide to deserving children. It has a new team program for creating prosthetic hands for amputees.