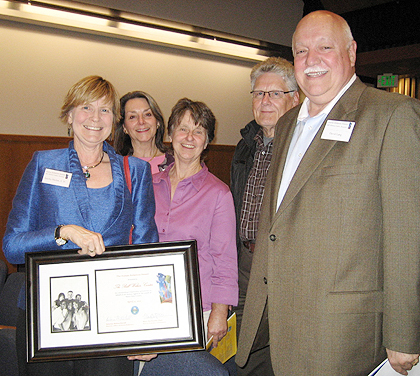 “It is such an honor to receive the Human Relations Commission Award because the whole committee voted for us on behalf of our work with youth,” says Sparky Harlan, BWC executive director.

Bill Wilson Center, 3490 The Alameda, is a community-based organization serving 10,000 Santa Clara County youth and family members annually through counseling, housing, education, and advocacy. BWC builds youth leadership skills, training youth to be peer mentors. It empowers youth and their families to become advocates for themselves and to work for system change.

BWC is the only shelter and drop-in center for homeless youth in Santa Clara County and serves more than 400 youth yearly in its residential program. BWC has purchased and is currently renovating a 28-unit apartment complex in Santa Clara that will be used as permanent, supportive housing for transition-age homeless youth, ages 18 to 25.

“When you look at the [federal and state] programs being cut, it is programs for the most vulnerable people. If we don’t try to continue to serve these people, we’ll have disaster. The programs honored tonight are programs that are cost-effective for the community and are generating tangible results,” says Delorme McKee-Stoval, manager, Santa Clara County Office of Human Relations.

Eight Human Relations awards in all were given to individuals and organizations in Santa Clara County that have made a difference in the lives of children. The organizations thrive, in part, thanks to countless dedicated volunteers.

“All of you who fight for our children are heroic for taking a stand [even] when you are terrified…and when those around you are silent,” says keynote speaker the Honorable Judge La Doris Cordell, now the Independent Police Auditor for San Jose.

The last three award recipients: Generations Community Wellness, which promotes good nutrition and physical activity for children; Honorable Blanca Alvarado, who has served in public office for almost 28 years and championed many policies and programs benefitting children and families; and Fresh Lifelines for Youth, which reduces juvenile crime and incarceration through legal education, mentoring, and leadership training.

BWC (www.billwilsoncenter.org) first opened its doors in 1973 as the Webster Center and was later renamed to honor the late Bill Wilson, Jr., who spearheaded the idea of establishing a counseling center for troubled youth. Wilson was the owner of Wilson’s Jewel Bakery (which closed its doors in 2006), served as a Santa Clara councilman from 1963 to 1971, and served a term as mayor in 1965.