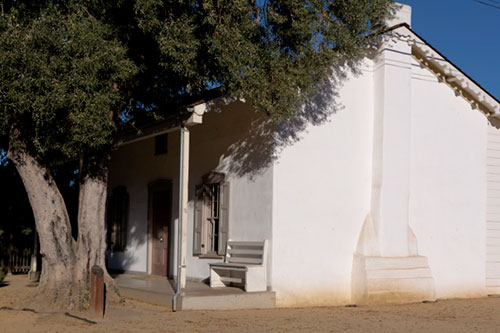 Santa Clara has a rich and vibrant history, much of which is told through its historical homes and museums, but one of the buildings, the one at 373 Jefferson Street, has the honor of being the oldest residential structure in the city.

Experts have determined that the Berryessa Adobe, a modest 38 by 18 foot home constructed of adobe bricks, was built in the late 1840s by Juan Chrisostomo Galindo – one of the first colonists to come to the Santa Clara Valley with the Juan Bautista de Anza Expedition. However, in “Old Santa Clara Valley: A Guide to Historic Buildings from Palo Alto to Gilroy” by Phyllis Filiberti Butler, it says, “According to local lore the building was once a mission jail for unruly Indian field hands. And since it has an outside staircase leading to an upstairs garret, not unlike Vancouver’s description of the Indian ‘apartments’ of 1792, the structure may in fact have been constructed earlier than is generally supposed.”

Regardless of the year the building was built, it has changed hands quite a few times over the years. It was first sold to Maria Zacharias Bernal y Berryessa. Berryessa then gave the home to her son, Fernando, who was later killed in San Rafael on the order of John C. Fremont during the Bear Flag Revolt.

According to a 1970 article in the San Jose News, “The Berryessa mortgaged the property to Francisco Bernal and his wife on Aug. 26, 1869, for $500. This was a little over two years after Berryessa finally acquired title to the property through an act of Congress.

“Hernandez sold it on April 18, 1878 to Antonio Fatjo for only $600. Fatjo, who had a vineyard on the lot, was the grandfather of the late Robert Fatjo, Santa Clara banker.

The above documented purchases prices and years vary slightly depending on the source used, but what is known for sure is that the home was the first of 30 landmarks that were recognized by the Santa Clara Historical Landmarks Commission in 1970 and purchased by the city in 1997 for $175,000.

A 1997 article in the Santa Clara Valley Weekly says that “while the total cost for both the purchase and restoration of the adobe is near $500,000, with its annual maintenance costs running around $10,000, [Geoff Goodfellow, director of planning for the city] said the adobe’s acquisition by the city is a rare happening.

In the same article City Historian Laurie Garcia says, “At one time there were hundreds of adobes in Santa Clara. By 1866 there were 17. Today there are two and only one is eligible for the national registry because it is still in tact. It is an heirloom and represents a major part of the history of the city – the Mexican history.”

A 2004 Mercury News article announced that the adobe would be turned into a museum “filled with documents, objects and other artifacts from the era before California’s statehood in 1851 through the first half of the 20th century.” The museum opened October 9 of that year.

The Berryessa adobe is typically open Thursdays and Saturdays from noon to 2 p.m. or by appointment. Call 408-615-2488 or email BerryessaAdobe@santaclaraca.gov for more information.

Community
Author Press ReleasePosted on December 2, 2022
As the community prepares to celebrate the season of giving, Home Instead® encourages residents of Cupertino up to Belmont to share the holiday spirit...

Community Schools
Author Diane AndrewsPosted on December 1, 2022
Sutter Elementary School teacher Shirley Stibbard’s 23 kindergarten students—and their parents—clearly love her. She has the proof. It was about 5 p.m. Friday in...
SPONSORED