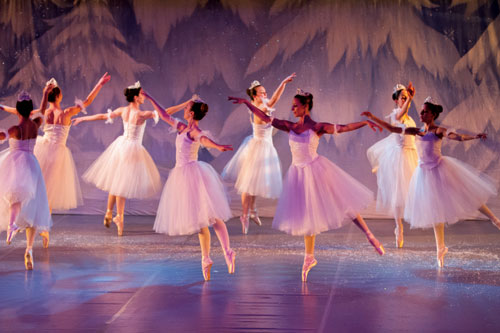 There are hundreds of holiday traditions like hanging stockings by the chimney with care, watching It’s a Wonderful Life, and setting out milk and cookies for Santa Claus on Christmas Eve. The Santa Clara Ballet Company has its own tradition – producing The Nutcracker each holiday season.

Now in its 39th year, the Santa Clara Ballet’s full-length, traditional version of the holiday classic was performed at the Santa Clara Convention Center Theater December 8 and 9, with founder and artistic director Josefa Villanueva-Reyes, again, taking on the role of Frau Silberhaus. Villanueva-Reyes’ granddaughter, 16-year-old Rowan Allegra Reyes also graced the stage this year by reprising her role as the Sugar Plum Fairy. Villanueva-Reyes’ son, Andre Reyes, was sorely missed from this year’s performance. Andre Reyes, a full-time professor at the Pittsburgh Ballet Theatre School (the same ballet school Rowan Allegra Reyes attends), has danced the role of the Cavalier for the last few years. This year, however, he appeared to have taken a backstage role, directing and mentoring many of the dancers.

While the Santa Clara Ballet hires professional dancers for the key roles, the school’s performance gives opportunities for students, dancers and even non-dancers to be part of the show. Each year the company conducts open auditions and attracts dancers from across the Bay Area.

There are many reasons to like the production. For one, it’s a family affair. For years families have been a part of the stage show, allowing mothers and daughters, sisters, and cousins to dance side-by-side. Time and time again board members, performers, and even Villanueva-Reyes herself says the company encourages the entire family to get involved in both onstage and backstage roles. Additionally, the company does not try to compete with the San Francisco Ballet or Ballet San Jose – everyone has the opportunity to try out and be part of the show. There’s an intimacy in the company’s production that larger scale performances of the show are unable to match. For instance, after a performance of The Nutcracker, the audience can walk on stage and meet the performers – something not seen other places. Usually the audience is ushered out and must wait in a designated area where some of the performers will choose to greet and talk to audience members.

Community
Author Diane AndrewsPosted on June 24, 2021June 23, 2021
At just 16, Prajval Sharma from Cupertino has already founded a nonprofit that leverages the power of partnerships to make sure hungry kids start...

Community
Author Erika TownePosted on January 11, 2019
A 38-year-old Santa Clara man has died due to flu complications. Vincent Harris was in Arizona visiting family on the weekend of Jan. 6...