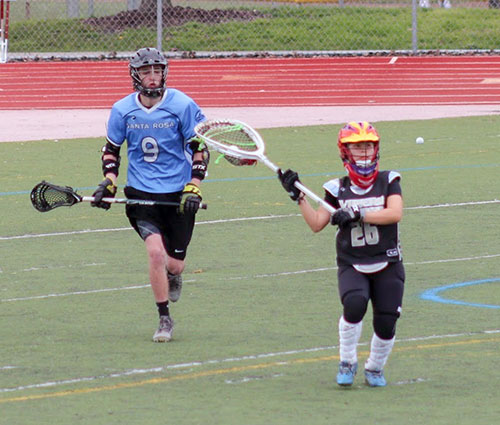 At the youth level, one of the most important qualities a lacrosse goalie can have is the ability to fight the urge to flinch as the ball careens toward their face. In boy’s lacrosse, the ball travels roughly 70 mph–more than double the speed Korin Wheaton was used to on her girls’ team and roughly as fast as an F1 tornado.

“The goalie is the last line of defence. If I make a mistake, the ball goes in–it is my mistake,” she added.

Wheaton, a freshman at Wilcox High School, said she first got interested in the sport after seeing the movie “Crooked Arrows,” a 2012 film centered on a lacrosse team making its way through a prep school tournament. Up until seventh grade, Wheaton played for the San Jose Vipers girls’ team, but then the team folded.

So she joined the boys team.

“What really appeals to me about the sport is that it is all about teamwork,” she said.

Matt Bond, of SixFifty Lacrosse, coached Wheaton on the boys’ eighth-grade intramural team, the SixFifty Seawolves. At 4’11”, Wheaton is hardly a typical lacrosse player, and Bond worried that her demure manner would cause problems with her playing goalie–a position that requires a lot of verbal communication. However, after a few games, his concerns were allayed.

Wheaton is a very “strong-willed girl,” Bond said, adding that “there is something about her that comes alive on the field.”

“I just think to myself ‘this is the game.’ I can’t stay quiet. I need to help my teammates,” Wheaton said. “Communication is key. If you want someone to score a goal, you have to talk to them; they can’t read your mind.”

Bond said Wheaton has the most important qualities of a good goalie: she is fearless, and she is mentally tough.

Because there is no girls’ team on which she can play full-time, Wheaton plays for the boys’ San Jose Vipers team, although she occasionally fills in on defence at San Jose Extreme Girls Lacrosse Club. She is trying to organize a girls’ team at Wilcox next year.

Although not originally a goalie, Korin fell into the role because it is what the team needed. Bond said it is quite atypical for a player to start playing goalie in high school.

When she first started tending net for the boys, Wheaton’s mom, Oh Wheaton, said she was worried because of the size and strength difference between Korin and her opponents. The first time she took a fast shot, Korin cried and had to leave the game, Oh said. But just a little while longer, she was ready to get back in the game, telling her mother she “wanted revenge.” She began to amass a collection of bruises.

“It is a very mental game. If your head falls out of the game, you might as well quit the game,” Korin said. “I got used to it. I started to like it. When I made a save, it was magical.”

“Eventually they became my medals. When I look at a bruise, I think ‘that is a save,’” she added.

Bond said he admires Korin’s willingness to “fight for something she believes in.”

“You wish more young people were like that,” he said.