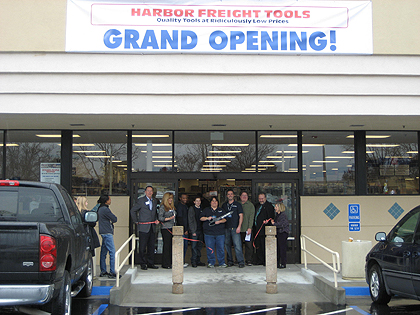 All the builders, do-it-yourself guys, wood hobbyists, and auto repair buffs in Silicon Valley are excited. No, they more than excited. They are thrilled about the opening of a Harbor Freight Tools store in Santa Clara. Enthusiastic guy shoppers and city representatives turned out—in the rain—for the February 18, 11 a.m., grand opening of the only Harbor Freight Tools store in Silicon Valley.

For those more into computers, fabrics, or TV remote controls than hammers and wrenches, Harbor Freight Tools’ claim to fame is more than 7,000 “high-quality tools at ridiculously low prices, combined with superior customer service.” It has hand tools, air tools, power tools, automotive and motorcycle tools, garage and shop tools, woodworking tools, welding tools, lawn and garden tools. Who even knew so many tools existed? Where will the guys put them all?

“I was driving by and noticed it, and I called Bill right away,” says Przybylski. “He jumped in his car and drove down. He called me from the store when he got there, but by that time, I’d already left with a cart full of tools. That was the best day we had.”

“I’m just thrilled to death they’ve opened this store,” says Cabral, a retiree with a home wood shop. “I’ve always gone to the Harbor Freight stores in Newark or Chico.”

Harbor Freight Tools began as a mail order business in 1968. It now has 39 California stores—344 nationally in 45 states. It still sells online (www.harborfreight.com/ca/santa-clara) but does the most business in its stores.

“If you’re working with your hands and need tools, this is the place to come. The prices are right and it has the right tools,” says Przybylski.

“We’ve been coming since day one,” says Cabral. At today’s gas prices, the money they now save by shopping closer to home will pay for a new tool or two.

“I’m a tool geek,” confesses Santa Claran Martin O’Conner. “I work on cars just for fun. This is pretty nice stuff—better than I expected,” he says. “I’m just looking.” (Sure you are, Martin.)

“I’m so excited I get to come here instead of Newark,” says Rod Diridon, Jr., Santa Clara city clerk and auditor. “My friends and I race cars, and we constantly lose tools at the track.”

Santa Clara Mayor Jamie Matthews and Steve Van Dorn, president & CEO of the Chamber of Commerce and Convention-Visitors Bureau, took part in the grand opening ribbon cutting. Tracy Lauth, board of directors president for Habitat for Humanity Silicon Valley, accepted a donation of $1,250 in construction tools for the nonprofit, volunteer organization to use in building homes for the working poor.

“Santa Clara is very business friendly. Electric service rates are 25 to 35 percent less than across the street in San Jose. Combined utility rates are the lowest in the nine Bay Area counties. The permitting process moves at the speed of business, and business fees are lower than, for example, in San Jose.”

“Plus,” Matthews adds, “you get personal service. You know the mayor by first name.”

Santa Claran Tracy Harrell, one of 26 new full-time employees, is another guy thrilled to have Harbor Freight Tools in Santa Clara. He had been unemployed for eighteen months before landing the job.

“I feel great working here. It’s like a family environment. It’s pretty cool,” he says. Harrell will be pleased to help if you need a tool or two. Or even if you are “just looking.”

The Dish: Celebrate the New Year at China Stix

Business
Author Melissa McKenziePosted on February 1, 2012
Piggybacking off the success of Coriander, a quick-service Asian restaurant in San Francisco’s Valley Fair, the new Oryza Bistro Asiana at Valley Fair in...