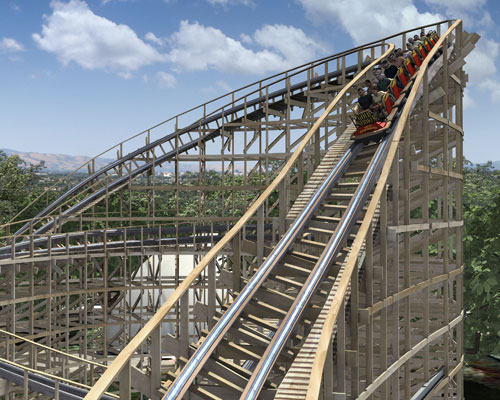 There are two elements to the First Rider program, which is tentatively scheduled to take place May 8, 2013 (Gold Striker’s general opening will be announced soon thereafter).

Those wishing to submit an online bid can do so at www.cagreatamerica.com/goldstriker Winning bids will receive one of Gold Striker’s initial rides and access to the First Rider reception that will include members of the 49ers organization along with other celebrities. Bids will be accepted through May 1.

“We are proud to partner with the 49ers Foundation to support American troops and deserving Bay Area youth,” said California’s Great America Vice President and General Manager Raul Rehnborg. “Gold Striker will be one of America’s unique coasters and providing a once-in-a-lifetime opportunity to assist local charities is the perfect way to launch Gold Striker.”

“The 49ers Foundation is honored to be working with our Santa Clara neighbors at California’s Great America to help further enhance the offerings of our entertainment district in the heart of Silicon Valley,” said Joanne Pasternack, Executive Director of the 49ers Foundation. “With the First Rider program not only are we partnering to raise much needed funds to support at-risk youth but we are also bringing visibility to a great addition to our community – Gold Striker.”

Gold Striker will feature a 174-foot initial descent tunnel that will be enclosed by wood on both sides, have corrugated metal on top and in-fill underneath the tracks to replicate a true gold mine feel. The only visible light on Gold Striker’s initial descent, which will hurl riders down a 50 degree slope at almost 54 miles per hour, will be following the first turn, creating a nearly pitch black visual. Gold Striker will be the tallest and fastest wooden coaster in Northern California.