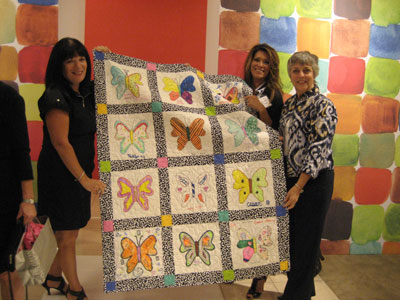 Forget the boxing gloves and workout shoes. The Grand View League is fighting cancer with a glass of champagne in one hand and a fistful of raffle tickets in the other hand at a light buffet breakfast and fashion presentation hosted by Nordstrom Valley Fair. About 100 Grand View League members and friends had to set their alarms early September 1 for the 8 a.m. event held on the second floor of the upscale department store.

With its goal of raising the greatest amount of money to fight cancer at the least expense, the Grand View League found a generous sponsor in Nordstrom Valley Fair, which assumed all the costs for “Fashions Funding a Cure.” Nordstrom also organized the breakfast and fashion show, which included tips on make-up and fall fashions trends (neutrals and animal prints) for women and men, all available at Nordstrom.

“What’s a man’s best accessory?” asks the fashion commentator. “A wallet!” comes the fast reply from the audience of mainly women.

“We are very grateful to Nordstrom Valley Fair for supporting our fight against cancer and for sponsoring this event,” says Debbie Longinetti, event chair for Grand View League, a Silicon Valley fund-raising partner with the American Cancer Society (ACS).

One hundred percent of event ticket and raffle donations goes to the ACS. Generous individual donations brought the total raised to over $38,000 as of September 2. Since its founding sixteen years ago in September of 1995, the Grand View League has donated over $12 million to the ACS, in particular, to fund young cancer research investigators.

“Events such as Fashions Funding a Cure engage more people with our mission and bring in significant financial support,” says Michael Chae, ACS regional vice president. “The Grand View League has been incredible over the years.”

“We’re proud of the league,” says founder Brookes Brown. “This is personal to me. I’ve had way too many people in my life I’ve lost to cancer. It’s a little something I can do for those people in my life I love and who have suffered with the disease.”

Manzano-Juarez, whose father is a cancer survivor, enjoyed sharing the morning with her mom. “I’ve made good friends in the Grand View League,” she says, recalling strictly social activities with league members.

“Have we found a cure for cancer? Not yet. My goal is to find a cure and work with fabulous women that have the same mission I do—to live in a cancer-free world,” says Joanne Meninger, league president and cancer survivor.

The ACS (www.cancer.org) is the nation’s largest non-governmental investor in cancer research. It recognizes the importance of funding promising grants for researchers early in their careers, and, nationwide between 1946 and 2009, forty-four ACS researchers became prize-winning Nobel Laureates.