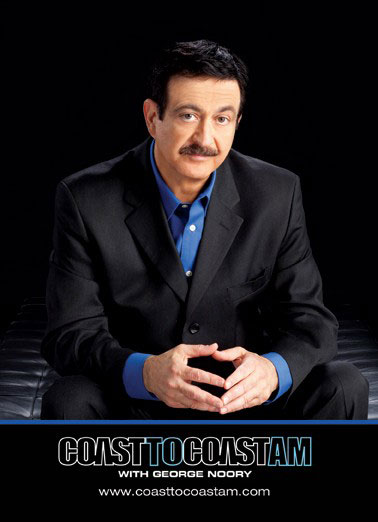 Lots of media people say lots of things about radio talk show host George Noory, whose late-night Coast to Coast AM (coasttocoastam.com) is currently North America’s most popular insomniac and night-shift worker listening – and who is also featured speaker at the upcoming Conspiracy Con conference at the Santa Clara Marriott.

Principally they want to suss out Noory’s own thoughts on the exotic subjects – spectral, conspiratorial, paranormal, and extraterrestrial – that his callers find an audience and a home for on his interview show.

Less commented on is Noory’s quiet skill at turning his listeners into the show’s central interest. Put simply, he’s one of the most likable guys you ever want to meet – no doubt a critical ingredient in Coast to Coast AM’s popularity and the affectionate intimacy Noory has with his faithful late-night audience.

Another ingredient is Noory’s own story-telling gifts. When I ask how, after a long career in many aspects of broadcasting, he got into late-night talk radio, he begins, “Well, Carolyn, let me tell you an interesting story. Back in the mid-1990s…” It’s a story he’s told before, about seeing the movie Talk Radio with Eric Bogosian as a radio host. But somehow, you want to hear Noory tell it again, now.

“That’s the one thing I’d never done. I’d never been a talk show host.” He began working part time as a radio host in his hometown of St. Louis. Not lacking in showmanship, “I was developing an interest in strange stories and those being more appropriate at night.

“Back in 1996 I heard Art Bell [Coast to Coast’s creator] and thought, that’s a show I want to do…night-time is the time for the mysterious.” From his Nighthawk show in St. Louis, Noory’s audience grew and eventually he was invited to substitute for Bell on Coast to Coast. Bell, upon retiring, turned the reins over to Noory.

Bell hosted Coat to Coast from its founding in 1988 until 2003 – and professed the same strategic and principled neutrality that Noory does as to the truth value of the tales of close encounters of all kinds he elicits on his show. With Bell’s decidedly more pronounced personality, in the early days it would have been easy to write George Noory off as the Ed McMahon to Bell’s Johnny Carson.

But with time Noory’s effective charm has come into its own. He retains Bell’s presence with classic Art Bell broadcasts in the show’s archives – “Somewhere in Time” – and mentions Bell often. “I want to keep that memory of Art Bell alive. It’s in honor to him. Without him I wouldn’t be here.”

The other ingredient in Noory’s uniquely successful recipe are those who tune in – and call in. “My listeners are very important to me. They are the family, much more to me than voices on the phone asking questions…they are part of the program.

“You come into a person’s home. One reason I broadcast live every holiday that I’m working – and I insist my co-hosts broadcast live – is because holidays are very special, and lonely for a lot of people.”

Regular listeners to the show can attest to Noory’s concern. Most have stories about a troubled-sounding caller being gently asked by Noory to stay on the line to speak privately. Last winter, Noory’s audience donated $18,000 to help show regular Mitch Battros cover out-of-pocket costs for his newborn daughter’s ICU care.

“We’ve helped people who have medical problems or are very depressed. We got a cataract operation from a donor for a listener who needed that. We do that a lot. I can’t turn my back on somebody. Look, I need you around next week to call me.”

So how long does 60 year-old Noory think he’ll stay on the air? “One day we’re going to go to commercial break and when we come back my producer will come on the air and tell listeners, ‘He’s passed on.’ If my voice can keep going and my health stays strong, why stop? If I retired, I’d only go and do some more broadcasting.”

Sounds like a theme for the show: Will Noory broadcast from the afterlife? But Saturday night, around 8 p.m. he’ll be speaking here in Santa Clara. About what? “Every conspiracy theory you can think of,” he says “and a few jokes thrown in.” For tickets, visit conspiracycon.com.

You've Come a Long Way, Baby&mdashor Have You?