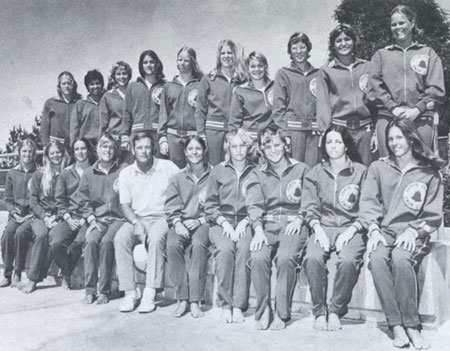 It was home to the Santa Clara Swim Club and the coach, George Haines, who put Santa Clara front and center on the athletic map. Now, swimmers inspired by Haines’ memory aim to create a new Santa Clara’s George Haines International Swim Center (ISC) for the 21st century.

When the ISC opened in 1967, the Santa Clara News wrote that it was “Judged to be the finest outdoor swim complex in the world by those who know best.” An Aug. 16, 1968 Life magazine cover story called it “The world’s incubator of Olympic swimmers.”

Fast-forward 46 years. The venerable complex has long outlived its 25-30 year life span. The ISC’s infrastructure is deteriorating, maintenance is an ongoing headache, and shutdowns for repairs are increasingly frequent. Visitors could be excused for thinking they were touring an aging rust-belt factory, rather than a home to championship swimming.

Santa Clara has been talking about rebuilding the swim center for five years. But the end of redevelopment and a depleted capital budget make a city-funded project increasingly unlikely. Now, local swim clubs are gearing up to privately raise the $40 to $50 million it will take to rebuild the ISC.

One of the leaders of that effort is a swimmer who trained with the legendary Haines, Cynthia Owens, whose family moved from Connecticut in the 1960s so she could swim with the best. Owens, now a coach for the Santa Clara Swim Club and a Santa Clara Parks & Recreation commissioner, still lives in the same house within a bike ride to the ISC.

“We can’t bid for national competitions because the center doesn’t meet FINA standards,” she explains. “We need a second 50 meter pool. The dive tower platforms are the wrong height and they’re not wide enough. The center was built for what was needed 60 years ago. The sport has evolved and we need to modernize.”

Rebuilding the ISC isn’t just about civic ego. Being able to once again host the most prestigious aquatic events would bring hard cash into the city – about $8 to 10 million annually, according to Owens’ estimates. “It’s significant funding that would offset upkeep,” she says. “But we can’t bid on those events as [the swim center] continues to deteriorate.

“USA Swimming [the national governing body for U.S. swimming] loves Santa Clara,” she continues. “They would love to hold events here. East Coast swimmers like Mark Phelps like to come here because they can swim outdoors.” Other opportunities include the city once again being home to the U.S. Synchronized Swimming team as well as hosting the national team training for the 2016 summer Olympics in Rio de Janeiro.

However, a new swim center isn’t only about Olympians. It’s also a central part of the community’s recreation program. Today the swim center is the city’s most heavily used recreation facility, reports Owens. “It’s in use every minute from 5 a.m. to 9 p.m.”

The proposed design, by Berkeley-based ELS Architecture and Urban Design (www.elsarch.com), would be a “green” facility (LEED certified), and fit completely inside the current swim center footprint. It would include amenities like a fitness center, community gathering space, non-swimmer water, family play areas, and better flow and integration with the surrounding park.

“This pool, right now, doesn’t serve the community as well as it can,” says Owens. “The new design will have far less impact – noise and visual – on the neighborhood and park.”

Right now feasibility studies are underway. These are expected to finish this summer, and the renovation team expects to hold a fundraising kick-off event in the fall.

“In the 2012 Olympics, the U.S. won 104 medals, one-third of them from aquatic events,” Owens says. “More swimmers from Santa Clara have been inducted into the Swim Hall of Fame than from any other single county. We think having a brand new aquatics facility will be a big advantage for the U.S.”

Owens wants the world to know, “George Haines’ legacy is alive and well, and we want to have that for generations to come.”

24th Annual Day Away from Cancer for Courageous Kids