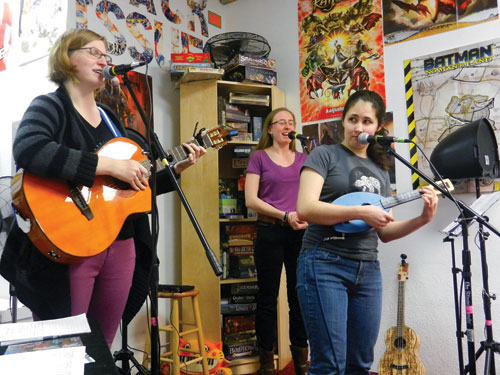 In 2009, pop-country darling Taylor Swift hosted Saturday Night Live by opening show with an adorable ditty about what she wouldn’t sing about in her monologue song (glitter, baking, breakups, etc.). Imagine that same syrupy sweet scenario, but instead of liking “sparkly dresses” and “things that smell like winter,” the songstress sang about having British do-all Stephen Fry’s baby and playing Dungeons and Dragons. Would it suddenly be weird?

So-called “nerd-folk” music has become more recognized over the last few years with acts like Jonathon Coulton and the increasingly popular w00tstock music event. But, can the Average Joe comprehend these groups’ love of all that is geeky and their random (and comic) references to pop culture?

“There are people who are not nerds who can enjoy our music,” says Angela Webber whose band, The Doubleclicks, played with Molly Lewis at a packed Illusive Comics and Games in Santa Clara on January 10. “We play for a lot of nerds, and we, ourselves, are nerds so the songs that we write are about D&D or board games instead of about getting drunk and going to clubs. But all of the things about love and life and personalities that come through are in any song.”

The sentiment rings true with many of Lewis’ songs including “It All Makes Sense At The End.” When the ukulele-playing Seattleite sings, it appears as if she’s lashing out against a boy who wronged her. But, she’s not. She’s creatively breaking up with Wikipedia. “Being a lady songwriter I’m required to write a cranky song about a boy or they kick me out of the guild,” says Lewis of the song. “And, I really didn’t have any cranky feelings about boys when I became a lady songwriter, but I found a loophole because I had this really weird week where for six days I had a Wikipedia page…I felt really good about myself and was like ‘yeah, I made it. The Internet says so.’ But, then it got taken down because I was not famous enough…And, the most depressing thing that I could have done in that situation I did. And, that was to read their itemized list of all the reasons I was not significant enough to have a Wikipedia page. I didn’t even mind not being famous, that’s totally fine, but they were arguing that I was insignificant and that sucked. I felt really angry and it made me feel alive. So, I channeled those feelings into [It All Makes Sense At The End] which ostensibly is about a boy, but it’s not.”

The Doubleclicks also write clever lyrics about dinosaurs, hipsters and massive amounts of heartbreak. Webber says “Oh, Mr. Darcy” is one of the most meaningful to her. “It’s the true story of romanticizing Colin Firth from Pride and Prejudice and then falling into a trap when you meet an actual British guy who’s kind of a jerk and realize that he’s not Colin Firth just because he has a British accent. So that’s one of the most true and emotional stories we’ve told in a song so far.”

They, too, utilize the ukulele in their music, but Webber’s bandmate and sister, Aubrey, adds the bonus of a cello to enhance their sound. “Cello makes everything sound wonderful…especially when Aubrey plays it,” says Webber.

The two acts are fun, funny, friendly and definitely worth checking out. They also want you to love them – just not “Ironically.”

Laugh out loud: Watch http://www.youtube.com/watch?v=w1bXy5pSGJE to see Lewis sing “An Open Letter to Stephen Fry” at a Harvard event attended by and honoring Fry.