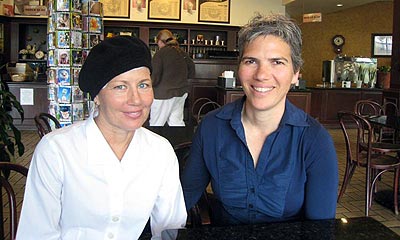 15 years ago, Terri Hill and Laura Cabral met at a gay and lesbian running group in Palo Alto called FrontRunners. The two eventually trained for a marathon together and got to know each other better.

“A friend asked me who my type was, and I thought to myself, I’d like to be with someone like Laura,” Hill says.

The feeling was mutual.

“When I first met Terri, she was doing a running event and I was helping out with food,” says Cabral. “There was this voice that told me that we’d be together.”

Cabral was right. Today Hill and Cabral have been together as a couple for six years and have been legally married for three years. Hill, an artist recovering from brain cancer, was born in Berkeley and has lived in Santa Clara for 23 years. Cabral, a land surveyor, was born in Santa Clara and grew up on a ranch on Homestead Street. These two local ladies point out that there are many more gay couples based in Santa Clara, such as the “gaybors” living on their street.

“It has never been a problem for us to hold hands or hug in public,” says Hill. “Santa Clara is a welcoming community full of diversity. Once, I was at a painting class among retired women in a retirement community. I mentioned my wife and then I was asked for clarification. So I explained to [these women] how I got married in a county building in San Jose. And I got a standing ovation.”

Hill and Cabral have some strong opinions about Proposition 8, a discriminatory ballot measure from 2008 that proposed to unfairly take away the rights of same-sex couples to marry in California. According to Cabral, though Proposition 8 was overturned and is working its way through the court systems, at this time, same-sex couples in California are still denied the right to marry.

“I was so shocked when Prop 8 passed,” Cabral says. “It’s crazy that someone can rule whether or not I’m allowed to marry.”

“When California voted yes on Prop 8, my daughters took it as a personal attack on their family,” Hill says. “[My daughter] Monica was out picketing on Stevens Creek and Winchester, and also later at a rally.”

Hill and Cabral advise individuals who want to come out to join social groups and check out the Billy DeFrank LGBT Community Center in San Jose. While acknowledging that some closeted individuals might risk relationships with family members or peers when they come out, Hill and Cabral also point out the rewards of being authentic to oneself.

“When I came out years ago, it was very freeing,” Hill says. “Laura’s family is very welcoming as is mine. My two adult daughters call us both moms. [Coming out] is easier if you’re comfortable with yourself and can remind yourself that how you were made was perfect.”

“Terri and I have had an easy time being out and living our lives truthfully,” Cabral says. “[Coming out] depends on each person’s situation. Most people around you probably already know, and they’re still around you.”

Where Do Babies Come from?